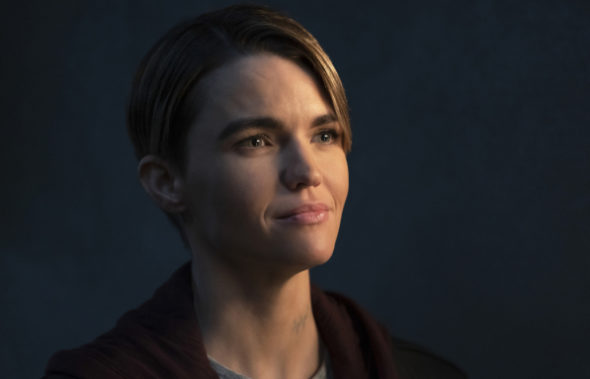 The costume may look the same when Batwoman returns to the airwaves for its second season but the face under the cowl will be different. CW series star Ruby Rose has quit her role in the superhero series ahead of season two. She did not give a reason for the exit. The show was renewed in January and the title role will be recast ahead of its 2021 return.

Batwoman stars Rose, Meagan Tandy, Camrus Johnson, Nicole Kang, Rachel Skarsten, Dougray Scott, and Elizabeth Anweis. The show is based on the DC Comics character and revolves around Kate Kane (Rose), a strong woman who never planned to be Gotham’s new vigilante. After a dishonorable discharge from military school and years of brutal survival training, Kate returns home to Gotham City when the Alice in Wonderland gang targets her father, Jacob Kane (Scott), and his security firm. They kidnap his best Crow officer, Kate’s ex-girlfriend Sophie Moore (Tandy). In order to help her family and her city, she becomes the thing that her father loathes the most — a vigilante. With the help of her compassionate stepsister, Mary (Kang), and crafty Luke Fox (Johnson), Kate continues the legacy of her missing cousin, Bruce Wayne (aka Batman), as Batwoman.

“I have made the very difficult decision to not return to Batwoman next season,” Rose said in a statement. “This was not a decision I made lightly as I have the utmost respect for the cast, crew, and everyone involved with the show in both Vancouver and in Los Angeles.”

“I am beyond appreciative to Greg Berlanti, Sarah Schechter and Caroline Dries for not only giving me this incredible opportunity but for welcoming me into the DC universe they have so beautifully created,” she said. “Thank you, Peter Roth and Mark Pedowitz and the teams at Warner Bros. and The CW who put so much into the show and always believed in me.”

“Thank you to everyone who made season one a success — I am truly grateful,” Rose concluded.

“Warner Bros. Television, The CW and Berlanti Productions thank Ruby for her contributions to the success of our first season and wish her all the best,” the companies said. “The studio and network are firmly committed to Batwoman’s second season and long-term future, and we — along with the show’s talented creative team — look forward to sharing its new direction, including the casting of a new lead actress and member of the LGBTQ community, in the coming months.”

What do you think? Have you been watching the Batwoman TV series? Are you disappointed that Rose won’t be returning for season two?

I got about halfway through episode one but the memes became so predictable it gave me a headache. I’m sure there are plenty of fangirls out there to keep it going though.

I really got into this show. It won’t be quite the same without Ruby Rose. She’s bat women. Sorry to see her go…

Isn’t something wrong when they say they are casting only someone from this or that community ? Shouldn’t it be the best person for the job ? It’s discrimination reverse but still discrimination. It’s also saying that only a lesbian can be a good Batwoman. If I was a woman or a lesbian, I’d be insulted. I really didn’t like Batwoman. I only made it through a couple episodes before I couldn’t watch it anymore. I really don’t care or want to know what any actors or actresses prefer in their lives or bedrooms. Just entertain me and I’m happy.… Read more »

Batwoman is the worst DC series I have seen so far . The script is hilariously bad as is the wooden acting .

I think that Charlize Theron will be perfect in this role.

It’s not about who’s perfect for the role or any role in any show, its about the storyline dialogue and acting skills as a whole that make up the best series. Having the right cast is necessary too as its charisma for the show but like I said without a good storyline and acting skills with a good dialogue the show won’t be good.

I am EXTREMELY DISAPPOINTED tat Ruby Rose dropped out.

I will probably give her replacement a chance next season, because the producers ar continuing her role as a (realistic and mostly matter-of-fact) gay woman as a strong, smart, socially conscious/ethical) SUPERHERO. Plus, she is beautiful in her way – especially when in costume : they eyes!

Actually, my very favorite has always been Grey’s Anatomy, not only because of their excellent treatment of gay characters, but because of how excellently it is scripted, acted and directed, as well as the realism

They need to hire Jacqueline Toboni, Trubel from Grimm, to be the new Batwoman. She has the look and the skills having already played a badass character on Grimm.