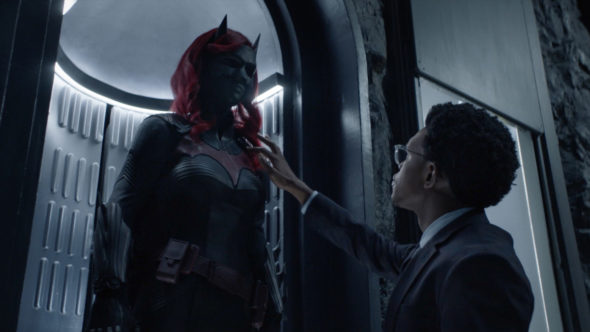 Is Ryan up protecting Gotham in the second season of the Batwoman TV show on The CW? As we all know, the Nielsen ratings typically play a big role in determining whether a TV show like Batwoman is cancelled or renewed for season three. Unfortunately, most of us do not live in Nielsen households. Because many viewers feel frustration when their viewing habits and opinions aren’t considered, we invite you to rate all of the second season episodes of Batwoman here. *Status Update Below.

A CW superhero drama, Batwoman stars Javicia Leslie, Dougray Scott, Rachel Skarsten, Meagan Tandy, Nicole Kang, and Camrus Johnson. The show is based on the DC Comics character and initially revolved around Kate Kane (Ruby Rose), a strong woman who never planned to be Gotham’s new vigilante — Batwoman. In the second season, Ryan Wilder (Leslie) discovers Kate’s Batsuit and sees it as her chance to finally be powerful and no longer a victim as she survives in the tough streets of Gotham. Kate has gone missing and citizens of Gotham believe Batwoman has fled the city following a public stand-off with Commander Jacob Kane (Scott) and the Crows. Kate’s disappearance hits hardest at home where Jacob, Sophie (Tandy), Luke (Johnson), Mary (Kang), and even Alice (Skarsten) each struggle with the devastating news in their own way. Meanwhile, the False Face Society tightens its grip on Gotham distributing a perilous new drug known as Snakebite, “Bruce Wayne” (Warren Christie) finds his way home to wreak havoc, Safiyah (Shivaani Ghai) surfaces with plans for revenge, and a new set of villains descends on the city. It’s clear that Batwoman is needed.

What do you think? Which season two episodes of the Batwoman TV series do you rate as wonderful, terrible, or somewhere between? Do you think that Batwoman should be cancelled or renewed for a third season on The CW? Don’t forget to vote, and share your thoughts, below.

*2/3/21 update: Batwoman has been renewed for a third season on The CW.

The last episode of batwoman was amazing! I hope they make more.

Batman is stale old news, this is the show people are talking about!

Talking about? Yes. Watching? No.