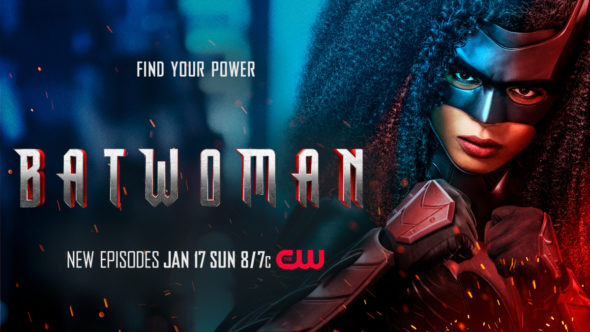 Television history is littered with TV shows that have, for one reason or another, lost their lead actors. Some series are cancelled within a year while other shows continue on for many more seasons. What will become of this CW show? Will Batwoman be cancelled or renewed for season three? Stay tuned.   *Status Update Below.

A superhero drama, Batwoman stars Javicia Leslie, Dougray Scott, Rachel Skarsten, Meagan Tandy, Nicole Kang, and Camrus Johnson. The show is based on the DC Comics character and initially revolved around Kate Kane (Ruby Rose), a strong woman who never planned to be Gotham’s new vigilante — Batwoman. In the second season, Ryan Wilder (Leslie) discovers Kate’s Batsuit and sees it as her chance to finally be powerful and no longer a victim as she survives in the tough streets of Gotham. Kate has gone missing and citizens of Gotham believe Batwoman has fled the city following a public stand-off with Commander Jacob Kane (Scott) and the Crows. Kate’s disappearance hits hardest at home where Jacob, Sophie (Tandy), Luke (Johnson), Mary (Kang) and even Alice (Skarsten) each struggle with the devastating news in their own way. Meanwhile, the False Face Society tightens its grip on Gotham distributing a perilous new drug known as Snakebite, “Bruce Wayne” (Warren Christie) finds his way home to wreak havoc, Safiyah (Shivaani Ghai) surfaces with plans for revenge, and a new set of villains descends on the city. It’s clear that Batwoman is needed.

What do you think? Do you like the Batwoman TV series on The CW? Should it be cancelled or renewed for a third season?

*2/3/21 update: Batwoman has been renewed for a third season on The CW.

I watched the latest episode after a long lapse and was amazed that this show has actually got worse. It’s so bad and nobody’s watching it: why make it? Seems like a pointless exercise.

Had to be said

It’s hilarious how the showrunner and writers go above and beyond to infuriate what is left of the show’s fanbase. Step 1: Replace the OG from the comics with an OC that has no connection to anyone in the Batfamily. Step 2: Give the OC the OG’s family, friends, villains, bar, and apartment. Step 3: Name the 1st and the 2nd last episodes for the season after the OG, baiting the OG fans into believing she will become a series regular. *Bonus points for recasting the OG using the fan-cast favorite. Step 4: Torture the OG, brainwash the OG, make… Read more »