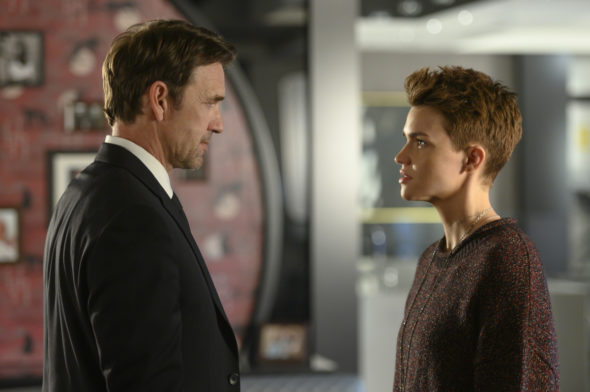 Will Kate clean up the streets of Gotham in the first season of The CW’s Batwoman TV show? As we all know, the Nielsen ratings typically play a big role in determining whether a TV show like Batwoman is cancelled or renewed for season two. Unfortunately, most of us do not live in Nielsen households. Because many viewers feel frustration when their viewing habits and opinions aren’t considered, we invite you to rate all of the first season episodes of Batwoman here. *Status update below.

A CW action mystery series, Batwoman stars Ruby Rose, Meagan Tandy, Camrus Johnson, Nicole Kang, Rachel Skarsten, Dougray Scott, and Elizabeth Anweis. The show is based on the DC Comics character and revolves around Kate Kane (Rose), a strong woman who never planned to be Gotham’s new vigilante. After a dishonorable discharge from military school and years of brutal survival training, Kate returns home to Gotham City when the Alice in Wonderland gang targets her father, Jacob Kane (Scott), and his security firm. They kidnap his best Crow officer, Kate’s ex-girlfriend Sophie Moore (Tandy). In order to help her family and her city, she becomes the thing that her father loathes the most — a vigilante. With the help of her compassionate stepsister, Mary (Kang), and crafty Luke Fox (Johnson), Kate continues the legacy of her missing cousin, Bruce Wayne (aka Batman), as Batwoman.

What do you think? Which season one episodes of the Batwoman TV series do you rate as wonderful, terrible, or somewhere between? Do you think that Batwoman on The CW should be cancelled or renewed for a second season? Don’t forget to vote, and share your thoughts, below.

*1/7/20 update: The CW has renewed Batwoman for a second season.

i hope Batwoman gets cancelled at the end of the show and replace it with a whole lot better of a show like a green lantern series or a cyborg series..

I will be surprised and shock if there is a third season for Batwoman. Too bad that CW didn’t hire the new actress to play Barbara”Batgirl” Gordon in the title role.

Just wanted to say that I am impressed with how the writers have developed the series around the lgbtq2 issue keepi going, guys. I love Ruby!

A good show keep it going I can’t wait for the next season..

Love the show pleas give me

I like Batwoman she Rocks and fights good,keep her going

show is not that great. Get a new villain please. She’s not going to reform her sister, waste of time