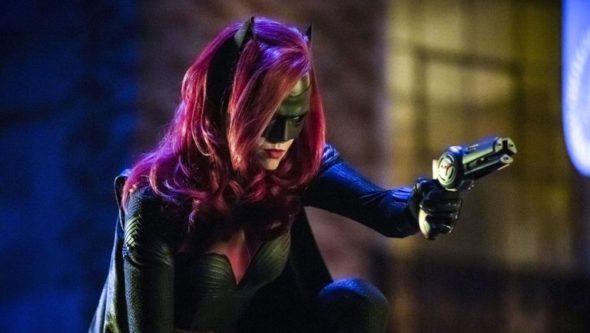 To little surprise, a new superhero series is coming to The CW’s 2019-20 schedule. The smallest network has ordered Batwoman to series. A relation of Batman’s alter ego, the show’s lead character (Ruby Rose) was introduced in November’s “Elseworlds”, the three-way crossover of the network’s Arrow, The Flash, and Supergirl series.

Batwoman will be executive producer Greg Berlanti’s ninth DC Comics-related series. It joins Arrow, Black Lightning, DC’s Legends of Tomorrow, The Flash, and Supergirl on The CW, plus Doom Patrol, Stargirl, and Titans on the DC Universe streaming service. Berlanti has several other shows on The CW, CBS, and Netflix.

Here’s The CW’s brief description of Batwoman, as well as a teaser. Dougray Scott, Elizabeth Anweis, Meagan Tandy, Camrus Johnson, Nicole Kang, and Rachel Skarsten are also in the cast.

Batwoman
Armed with a passion for social justice and a flair for speaking her mind, Kate Kane (star Ruby Rose) soars onto the streets of Gotham as Batwoman, an out lesbian and highly trained street fighter primed to snuff out the failing city’s criminal resurgence. But don’t call her a hero yet. In a city desperate for a savior, Kate must overcome her own demons before embracing the call to be Gotham’s symbol of hope.

Protector of Gotham. #Batwoman is coming soon to The CW! pic.twitter.com/FPmXLXvV19

What do you think? Do you plan on checking out the new Batwoman TV show on The CW?

I have no idea why the fact that she is gay has anything to do with this. Did they point out that Batman was heterosexual? Does being gay make her a better crime fighter? As they going to show her having sex so who she sleeps with matters? Until they made this a relevant point I was totally in now I really do not care

i don’t want there to be a bat women i think they should change there mind on doing that and not even do that and come up with something else like a rather there be a superman series on Wednesday nights i all so would like it if they were to cancel black lighting and do a green lightning series on Tuesday night at 8pm and Thursday night they could still have room for stargirl because there’s a stargirl series coming to the cw it air’s next year of 2020..

I’m already looking forward to it.

Whoever gave me 3 thumbs down must’ve misread my comment. I said, I’m looking forward to it.

I just don’t understand why everybody is giving me thumbs down.