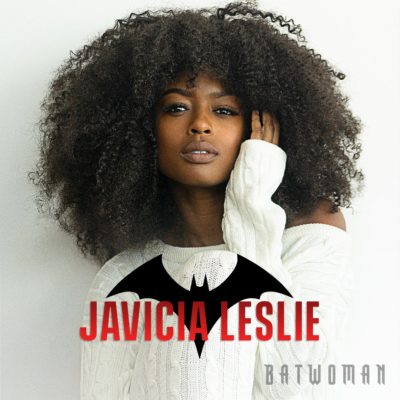 The CW has a new star for its Batwoman TV series. Ruby Rose, who starred as the show’s title character in the first season, opted not to return to the show for season two. Javicia Leslie, who TV viewers may remember for her role on CBS’s cancelled God Friended Me series, will play Ryan Wilder, the new face behind the lady crimefighter’s cowl.

Leslie said, “I am extremely proud to be the first Black actress to play the iconic role of Batwoman on television, and as a bisexual woman, I am honored to join this groundbreaking show which has been such a trailblazer for the LGBTQ+ community.”

Season two of Batwoman is expected to premiere in January 2021. Here’s The CW’s press release about the second season casting, and Rose’s reaction:

JAVICIA LESLIE IS THE NEW “BATWOMAN”

· Warner Bros. Television, The CW and Berlanti Productions announced today that Javicia Leslie has been cast as the new Batwoman.

· Javicia will make her debut in the iconic cape and cowl when “Batwoman” returns to The CW for its second season in January 2021, airing Sundays at 8:00-9:00 pm ET/PT.

· With her casting, Javicia becomes the first Black actress to portray Batwoman in a live-action television or film production.

· Javicia Leslie said: “I am extremely proud to be the first Black actress to play the iconic role of Batwoman on television, and as a bisexual woman, I am honored to join this groundbreaking show which has been such a trailblazer for the LGBTQ+ community.”

· Character description: Ryan Wilder is about to become Batwoman. She’s likable, messy, a little goofy and untamed. She’s also nothing like Kate Kane, the woman who wore the Batsuit before her. With no one in her life to keep her on track, Ryan spent years as a drug-runner, dodging the GCPD and masking her pain with bad habits. Today Ryan lives in her van with her plant. A girl who would steal milk for an alley cat and could also kill you with her bare hands, Ryan is the most dangerous type of fighter: highly skilled and wildly undisciplined. An out lesbian. Athletic. Raw. Passionate. Fallible. And very much not your stereotypical all-American hero.

· Prior to joining “Batwoman,” Javicia starred for two seasons on the CBS/Warner Bros. Television drama series “God Friended Me” and the BET drama “The Family Business,” as well as the feature film “Always a Bridesmaid.”

· “Batwoman” is produced by Berlanti Productions in association with Warner Bros. Television. Caroline Dries developed the series and served as executive producer for season one with Greg Berlanti, Sarah Schechter and Geoff Johns. “Batwoman” is based on characters created for DC by Bob Kane with Bill Finger.

What do you think? Are you looking forward to the second season premiere of Batwoman on The CW?

I say give her a chance. Let’s see if she can really bring the food to the table. I like what I have seen so far. Don’t compare her to Ruby Rose. Besides, I like Female Action Heroes !

Javicia Leslie is gorgeous, but she’s also 5 foot three and about 90 pounds. It doesn’t seem like the smartest casting but, I guess, it’s the CW… They don’t seem to mind churning out terrible content that nobody wants to watch.

The original actress decided to leave. She nearly got crippled doing this series. I hope the writing improves. I hope they selected Javicia for her acting abilities.

Oh dear, oh dear, oh dear. Do I care that a black woman is to be Batwoman? – No Do I care that Batwoman is bisexual? – No. What I do care about it both actresses crowing on about it so much, which is entirely unnecessary. Truly strong people don’t have to shout about it, they just show it. These comments just go to show two rather weak personalities, which is a shame as it gives a false impression for others who may be impressionable. I will give Javicia a fair shot but my concern is that we may see… Read more »

Unfortunately many people DO care. This is a first for Batwoman so why cry about the shouting? You negate your claim that you do not care by acting like firsts should never be mentioned. Your privilege is showing.

No Thanks ..there is no reason to change the characters Race..only to get more attention because of all the recent racial unrest in the current landscape…So Done with this show!

And you know that is why they cast a black woman how?

You seem kinda hostile everyone is allowed to have their own opinion not just your point of view.

I really hope season two has a better story. The story for the first season was just… ugh… I think that’s the reason why the show’s ratings were tanking.

We will have to see if this spikes the ratings or they continue their downward spiral. She does not have the name recognition of Ruby Rose and the series turned off a lot of viewers from its launch to its end. On the plus side I cant imagine her acting can be worse than Rose and I would hope they shuffled the writers group and got some people that will focus on writing good overall stories.

Exactly this. I hope I’ll even remember this series by the time it releases. They have done a poor job to represent a good and interesting story to watch up till now and honestly it’ll take allot to bring me back. Better writers would be a good start though.

Really? They are going to cast a 5′ 3 1/2″ actress as an action hero?
What would Wonder Woman have been like with a lead actress of similar height?
Javicia Leslie is a fine actress, I enjoyed her and the others on the late, lamented God Friended Me, but I think this is a serious mis-casting.

Wonder Woman is an amazon Batwoman is not. I see nothing wrong with her being short.