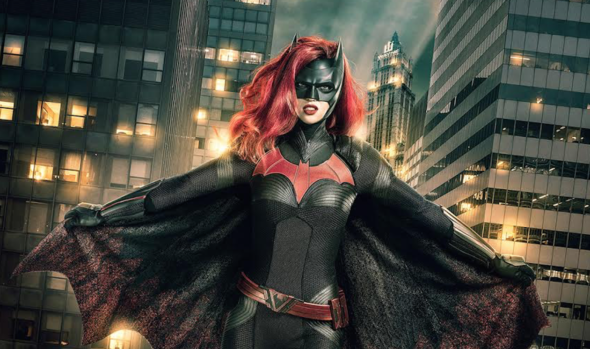 Gotham City’s female vigilante is staying on the case. The CW has renewed the Batwoman TV series for a second season which will air as part of the 2020-21 season.

Batwoman stars Ruby Rose, Meagan Tandy, Camrus Johnson, Nicole Kang, Rachel Skarsten, Dougray Scott, and Elizabeth Anweis. The show is based on the DC Comics character and revolves around Kate Kane (Rose), a strong woman who never planned to be Gotham’s new vigilante. After a dishonorable discharge from military school and years of brutal survival training, Kate returns home to Gotham City when the Alice in Wonderland gang targets her father, Jacob Kane (Scott), and his security firm. They kidnap his best Crow officer, Kate’s ex-girlfriend Sophie Moore (Tandy). In order to help her family and her city, she becomes the thing that her father loathes the most — a vigilante. With the help of her compassionate stepsister, Mary (Kang), and crafty Luke Fox (Johnson), Kate continues the legacy of her missing cousin, Bruce Wayne (aka Batman), as Batwoman.

The first season of Batwoman is averaging a 0.35 rating in the 18-49 demographic and 1.31 million viewers. Compared to The CW’s other series of the 2019-20 season, Batwoman is the network’s second-highest rated series in both categories.

The first season of Batwoman resumes on Sunday, January 19th. Season two is expected to begin airing in Fall 2020.

What do you think? Have you been watching the Batwoman TV show? Are you glad that it’s been renewed for a second season?

I got a bad feeling that I am one of the few Batwoman fans that will be happy to see that Batwoman will return for the second season I still remember the new lead actress from the CBS God Befriend Me. I still wish that CBS would renewal the show for the second season. I still believe that Katy Kane will disappear into the unknown while Ryan Wilder will become the New Batwoman. I still believe that Ryan Wilder got a tie to the Batman family and Ryan Wilder is really cover name. Ryan Wilder will turn out to be… Read more »

Who will be the next Batwoman? I really like Ruby Rose in the part.

Please put Mr. Freeze and his wife Niea Fries and more of Batman characters in season 2

Having Beth would have been lovely but not having Alice would have meant the end of drama.

Only if you’re bad at writing stories,
I mean they easily could have had Alice die, and then the father guy kidnapping beth thinking it was alice…..

There’s PLENTY Of ways you could have kept the story going with alice being dead.

Having her smart friendly sister would have added to batwoman.

I feel that Batwoman is hitting against the still existing stereotype that Gay people are not people or that gay people are weird, or that gay people sin in the eyes of both God and the bible. They forget the lines such as “Treat thy neighbor as your would treat yourself” (This assumes you treat yourself well, or your should start treating yourself well). Batwoman is strong, really strategic, smart, Charismatic (much more than Batman) and she is actually a better person than Batman(who has room for growth, I am sure batman would agree with me!) She also wittingly ads… Read more »

I have a feeling they think that lgbt want a batwoman who is like them. and they think that every lesbian out there is a closet lesbian. It’s 2020…….NO ONE CARES WHO YOU SLEEP WITH

What?! The strongest gay renewed?!