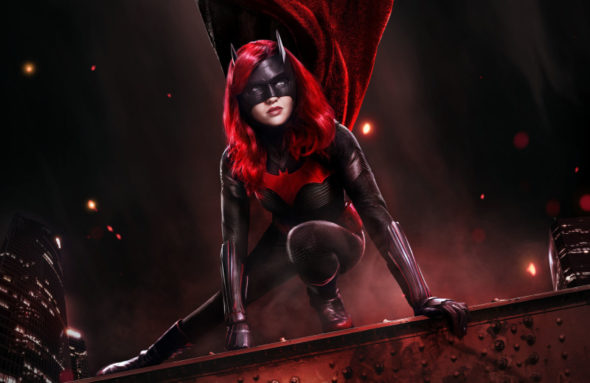 TV show description:
An action mystery series, Batwoman is based on the DC Comics character and revolves around Kate Kane (Rose), a strong woman who never planned to be Gotham’s new vigilante.

Gotham City is a metropolis in despair and its police department has been overrun and outgunned by criminal gangs. Jacob Kane (Scott) and his military-grade Crows Private Security now protect the city with omnipresent firepower and militia. Years before, Jacob’s first wife and daughter were killed in the crossfire of Gotham crime. As a result, he sent his only surviving daughter, Kate Kane, away from Gotham for her safety.

After a dishonorable discharge from military school and years of brutal survival training, Kate returns home when the Alice in Wonderland gang targets her father and his security firm. They kidnap his best Crow officer, Kate’s ex-girlfriend Sophie Moore (Tandy).

Although remarried to wealthy socialite Catherine Hamilton-Kane (Anweis), who bankrolls the Crows, Jacob still struggles with the family he lost, while keeping Kate, his remaining daughter, at a distance. Kate, however, is a woman who’s done asking for permission. In order to help her family and her city, she becomes the thing that her father loathes the most — a vigilante.

With the help of her compassionate stepsister, Mary (Kang), and crafty Luke Fox (Johnson), the son of Wayne Enterprises’ tech-guru Lucius Fox, Kate Kane continues the legacy of her missing cousin, Bruce Wayne (aka Batman), as Batwoman.

Still holding a flame for Sophie, Kate uses everything in her power to combat the dark machinations of the psychotic Alice (Skarsten), who slips between sanity and insanity. Armed with a passion for social justice and a flair for speaking her mind, Kate soars through the shadowed streets of Gotham as Batwoman.

Series Finale:
Episode #51 — We Having Fun Yet?
Batwoman (Javicia Leslie) and a panicked Bat Team (Nicole Kang, Camrus Johnson) must race against the clock as Marquis’s (Nick Creegan) nefarious plan balloons into something Gotham would never have suspected…and won’t see coming. Joining forces with Jada (Robin Givens), Ryan, Mary, Luke and Sophie (Meagan Tandy) must call on every skillset they possess to save the city. As more about Marquis’s shocking, twisted past unravels, a final stand-off between brother and sister puts Ryan’s life – and new love – on the line. And as Alice (Rachel Skarsten) reaches her breaking point, an empathetic Mary makes another appeal on behalf of her sister for the Joker’s buzzer, but everyone wonders – is Alice beyond saving?
First aired: March 2, 2022.

What do you think? Do you like the Batwoman TV show on The CW? Do you think it should be cancelled or renewed for another season?

Bring it back now

Here’s a petition to save the show.
https://www.change.org/p/savebatwoman-hbomaxsavebatwoman

Please give us another season of Batwoman. Not many shows on that we enjoy, but this is surely one of them.

Batwoman is a much better show since the firing of Ruby Rose.

Season 2 has been mostly boring. Not as fast paced as season 1. It was just getting interesting with the Kate/Circe addition of Wallis Day. The producers said they waited on the recast to make the transition from Ruby to Wallis seem organic and it worked but then they write her out after 6? Episodes! WTF? Both Kate and Jacob Kane dropped for S3. They’ll shows needs new oversight. That’s twice Kate Kane was ditched. When you bring a superhero to the screen, the secret identity character is just as important as the alter ego hero. Bad decision. Wallis was… Read more »

should be cancel and use the available budget to improve Flash, Superman & Lois and DC Legends further. Why waste money for this train wreck.

I somewhat agree, but Flash and Legends are just as bad, if not worse. They both deteriorated to pale imitations of there better days.

I love the new Batwoman story line everything the new bat is awesome too!

Why the in earth that make you replace Kate Kane, I think she is a perfect role to be a Batwomen. I hope that you consider to put her back into the show, if won’t then I find something else to watch

actress decided to leave this mess, can’t blame her

Really! The recast of Kate with Wallis Day was awesome. Then they dump Kate Kane.

Please do not cancel Batwoman, Look forward to the next episode every week, thank you!

Like many “supes-fans” i was really looking forward to another expansion in the DC Universe on the CW. LOVE Supergirl and of course The Flash and never really had the time for the others…but i wanted to make time for The Bat! Episode 1 was boring. There were no surprises whatsoever and to be honest i felt a bit insulted. This would have been edgy and suspenseful 25 years ago but now? I don’t think so and before the trolls come out to play i’m not saying the world no longer needs to be educated as to the social and… Read more »

YES BATWOMAN SHOULD BE PICKED UP FOR A SEASON 2. ON CW RUBY ROSE IS VERY GOOD AT PLAYING THE PART &THE REST OF THE CAST AIN’T ALL THAT BAD SOFAR EATHER THEN AGAIN IT’S ONLY 2 EPISODES INTO SHOW. IT LOOKS LIKE IT’S GOING TO GET A LOT BEEN THE FAR THERE THE SEASON GOES!!