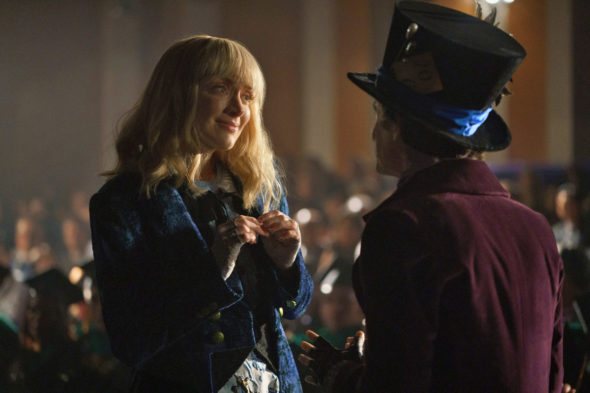 Which famous foes will pop up in the third season of the Batwoman TV show on The CW? As we all know, the Nielsen ratings typically play a big role in determining whether a series like Batwoman is cancelled or renewed for season four. Unfortunately, most of us do not live in Nielsen households. Because many viewers feel frustrated when their viewing habits and opinions aren’t considered, we invite you to rate all of the third season episodes of Batwoman here. *Status update below.

A CW superhero drama series, the Batwoman TV show stars Javicia Leslie, Rachel Skarsten, Meagan Tandy, Nicole Kang, Camrus Johnson, Victoria Cartagena, Robin Givens, and Nick Creegan. The show is based on the DC Comics character and initially revolved around Kate Kane (Ruby Rose), a strong woman who never planned to be Gotham City’s new vigilante — Batwoman. Kate disappeared and Ryan Wilder (Leslie) discovered her Batsuit and picked up the mantle. In season three, Ryan works to protect Gotham’s underserved communities and she and the Bat Team focus on finding Batman’s scattered trophies — a collection of objects seized from Gotham’s most infamous villains — before they land in pernicious hands. Ryan also struggles with the bombshell dropped by Alice (Skarsten), that her birth mother is still alive.

What do you think? Which season three episodes of the Batwoman TV series do you rate as wonderful, terrible, or somewhere between? Do you think that Batwoman should be cancelled or renewed for a fourth season on The CW? Don’t forget to vote, and share your thoughts, below.

*4/29/22 update: Batwoman has been cancelled by The CW so there won’t be a fourth season.

Please renew for season 4.The show has gotten so much better.It definitely deserves a chance.

Batwoman…AMAZING!!! We Definitely Need a Season 4!!! (I would also love to see a spinoff with Renee & (Ivy)Pam that would be Awesome!!!)
BATWOMAN SEASON 4 PLEASE!!!

As a tremendous Batwoman comic fan no I don’t feel Kate Kane I don’t even mind the character changing but the essence of Batwoman in this comics as Batman’s Equal not trainee this doesn’t fit for me. I can’t buy into this iteration. I hope those who like it enjoy it and take time to read the source material of one of the best female characters in comics.

Batwoman is a fantastic show. I always look forward to watch every week. The storylines are well written and all the episodes are well directed. The latest episode released was my favorite. Each episode leaves you wanting more and I really hope and pray that Batwoman gets renewed for Season 4.

Batwoman is a great show. I look forward to watching every week..I watch each segment 10 times or more. I bought the seasons 1 and 2 so I could understand what had transpired before season 3. There is no other show on TV that I enjoy more than Batwoman. It gives me something to look forward to on TV and I do have Directv so I have hundreds of shows that I could watch; yet, I prefer to watch Batwoman and each time I watch it there is always things I had missed in the previous viewing of each episode.

I loved the show. The unpredictability of when it was on kept me from watching. I.e. the juggled scheduling is responsible for the loss of viewers in my opinion. My friends tend to agree.

I’d prefer Rachel and Wallis get a spinoff. I want more of the Kane sisters.

I think Batwoman turned to be a great show.I loved Ruby Rose but if CW gives the show a chance it can make it.

I am love watching Batwoman I am loving the show more now than before Ryan is doing an ass kicking job and I love Alice and Mary Sophie Luke .and Batwoman I think deserve a 4 the renewal .I think it has a lot more to offer and more insite

Ended with Ruby Rose for me.