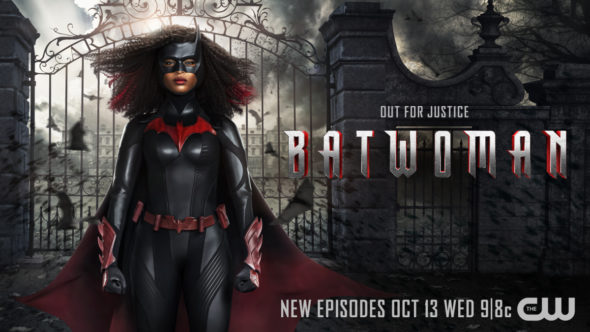 After airing for two seasons on Sunday nights, The CW has moved Batwoman to Wednesdays. How will this change affect the ratings, if at all? Will Batwoman be cancelled or renewed for season four? Stay tuned. *Status update below.

A superhero drama series, the Batwoman TV show stars Javicia Leslie, Rachel Skarsten, Meagan Tandy, Nicole Kang, Camrus Johnson, Victoria Cartagena, Robin Givens, and Nick Creegan. The show is based on the DC Comics character and initially revolved around Kate Kane (Ruby Rose), a strong woman who never planned to be Gotham City’s new vigilante — Batwoman. Kate disappeared and Ryan Wilder (Leslie) discovered her Batsuit and picked up the mantle. In season three, Ryan works to protect Gotham’s underserved communities and she and the Bat Team focus on finding Batman’s scattered trophies — a collection of objects seized from Gotham’s most infamous villains — before they land in pernicious hands. Ryan also struggles with the bombshell dropped by Alice (Skarsten), that her birth mother is still alive.

3/3 update: You can see the latest night’s ratings in context.

What do you think? Do you like the Batwoman TV series on The CW? Should it be cancelled or renewed for a fourth season?

*4/29/22 update: Batwoman has been cancelled by The CW so there won’t be a fourth season.

Dude it’s over and not soon enough. The writing was atrocious.

Leave Batwoman on I love this show.

why is Cancellation a question??? The showrunners told us many times that Season 3 was the last, while merely saying they’d continue the character in other Arrowverse areas. But Batwoman “the series” is over.

Have a link to a credible source?

Not that I’m allowed to share. Speaking of which, have YOU a credible source to the contrary?…of course not, or you’d have displayed it.

I didn’t claim that the show had been renewed.

and, of course, shows who’s final episode drops 10% of the Demo, and over 26% for the season, are always renewed.

now, I don’t know what the final Season ratings will be, but over the last 3 years, when they take THIS long to post the final numbers they’ve been substantially lower then the preliminaries. Although a guess, I guess final rating for s03e13 will be demo down 11.6%

Final rating at -36%…not even the die-hards stayed around to watch the wrap-up. Like so many shows these days, the people that praise the shows do not actually watch the shows.

But it could finish with a 0.10 for the season.

It’s not that I want Batwoman canceled. I would love to see it not get renewed though. 😀

If DC or Warner really wanted to do a series with an African American protagonist, they would invest to make a series of Milestone Media heroes, or do series with Vixen or John Stewart that are adored by thousands of fans, or they would have invested more features in Black Lightning, the rest, like this joke version of batwoman, is just creating criticism and using fraudulent accusations of racism as free marketing for this worst dumbass sitcom series with low investment, and making the old white CEO more richer easy… Black lives matter, and CW stop trying to profit with… Read more »

Yes. OC Batwoman was never truly about black representation, for the very fact that she was an afterthought when the original lead got sick of the studio’s abuses. Her creation was reactionary.

They wanted to shield themselves from the inevitable criticism of an appallingly badly done replacement character, and dropping ratings, by claiming racism.

The first season was not good, but the latter seasons have sunk to a new depth of incompetence.

Between the horrible ratings and the newest controversy witth the showrunners/execs and Ruby Rose I would be surprised if this gets a season 4, but it’s the CW so who knows?

Either way the show still seems to be terrible.

CW is strange, tt really shouldn’t have had a season 2. Its ratings tanked over the course of season 1 and the show lost its star.

The new Batwoman was made to create headlines and distract from Ruby Rose’s abrupt departure – and now we know why they were desperate to distract.