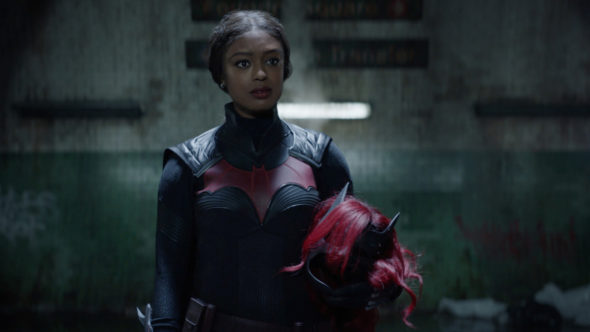 Gotham needs its hero and The CW wants Batwoman to return for the 2021-22 television season. The smallest network has renewed the show for a third year.

A superhero drama, Batwoman stars Javicia Leslie, Dougray Scott, Rachel Skarsten, Meagan Tandy, Nicole Kang, and Camrus Johnson. The show is based on the DC Comics character and initially revolved around Kate Kane (Ruby Rose), a strong woman who never planned to be Gotham’s new vigilante — Batwoman. In the second season, Ryan Wilder (Leslie) discovers Kate’s Batsuit and sees it as her chance to finally be powerful and no longer a victim as she survives in the tough streets of Gotham. Kate has gone missing and citizens of Gotham believe Batwoman has fled the city following a public stand-off with Commander Jacob Kane (Scott) and the Crows. Kate’s disappearance hits hardest at home where Jacob, Sophie (Tandy), Luke (Johnson), Mary (Kang) and even Alice (Skarsten) each struggle with the devastating news in their own way. Meanwhile, the False Face Society tightens its grip on Gotham distributing a perilous new drug known as Snakebite, “Bruce Wayne” (Warren Christie) finds his way home to wreak havoc, Safiyah (Shivaani Ghai) surfaces with plans for revenge, and a new set of villains descends on the city. It’s clear that Batwoman is needed.

The second season of Batwoman averages a 0.16 rating in the 18-49 demographic and 663,000 viewers. Compared to season one, that’s down by 40% in the demo and down by 33% in viewership. As live+same day ratings keep dropping for most network shows, The CW continues to focus on streaming and other revenue sources.

What do you think? Do you enjoy the Batwoman TV series? Do you plan to watch the third season on The CW?

I actually like Batwoman!!!! My favorite character I have to say is Alice! I hope they keep renewing it!!

The ratings have tanked for this show but the CW is apparently intent on sticking to their woke agenda even if it means flying the plane into the ground. The change in the story line was idiotic. They should have recast Kate Kane. The show might have had a chance then.

You have to be kidding me