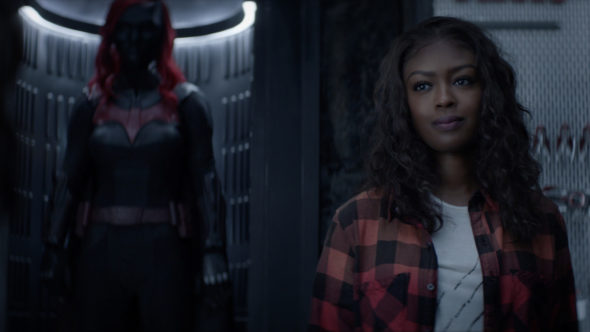 Can this show survive without its original lead? Has the Batwoman TV show been cancelled or renewed for a third season on The CW? The television vulture is watching all the latest cancellation and renewal news, so this page is the place to track the status of Batwoman, season three. Bookmark it, or subscribe for the latest updates. Remember, the television vulture is watching your shows. Are you?

Airing on The CW television network, Batwoman stars Javicia Leslie, Dougray Scott, Rachel Skarsten, Meagan Tandy, Nicole Kang, and Camrus Johnson. The show is based on the DC Comics character and initially revolved around Kate Kane (Ruby Rose), a strong woman who never planned to be Gotham’s new vigilante — Batwoman. In the second season, Ryan Wilder (Leslie) discovers Kate’s Batsuit and sees it as her chance to finally be powerful and no longer a victim as she survives in the tough streets of Gotham. Kate has gone missing and citizens of Gotham believe Batwoman has fled the city following a public stand-off with Commander Jacob Kane (Scott) and the Crows. Kate’s disappearance hits hardest at home where Jacob, Sophie (Tandy), Luke (Johnson), Mary (Kang) and even Alice (Skarsten) each struggle with the devastating news in their own way. Meanwhile, the False Face Society tightens its grip on Gotham distributing a perilous new drug known as Snakebite, “Bruce Wayne” (Warren Christie) finds his way home to wreak havoc, Safiyah (Shivaani Ghai) surfaces with plans for revenge, and a new set of villains descends on the city. It’s clear that Batwoman is needed.

The second season of Batwoman averaged a 0.12 rating in the 18-49 demographic and 495,000 viewers. Compared to season one, that’s down by 55% in the demo and down by 50% in viewership. Find out how Batwoman stacks up against other The CW TV shows.

Will The CW cancel or renew Batwoman for season three? The CW has always had smaller ratings than the other networks and isn’t even carried in all parts of the country. The channel has focused on streaming and other sources of revenue for quite a while. Since Batwoman is connected to The CW’s other superhero shows and is linked to the Batman family of characters, I believe the series will be renewed for a third season. I’ll update this page with breaking developments. Subscribe for free alerts on Batwoman cancellation or renewal news.

2/3/21 update: Batwoman has been renewed for a third season on The CW.

What do you think? Are you glad that the Batwoman TV show has been renewed for a third season? How would you feel if The CW had cancelled this TV series, instead?

They just change the ethnicity of the characters to call it racism when the show written with the butt fails, the reality is that if they really wanted to do a show for African Americans they would bet on Icon and Rocket and all this universe keep in mind im black and i have pride i reall cant like this show when then make batwoman looks like the clown Bozo when put this afro hair in a smal space of the bat helmet it’s not tho show the pride of black power it’s to force people become sick with look… Read more »

Wow what an horrible move by batwoman writers. Really I get it this season drop from 0.995. Million to 0.559 million. Losing half it viewers from last season but really you had him got shot while recording something for police on his phone. 26 days after a man got shot 10 times talking to police on phone. And mistaking it with a gun. And we supposed to pretend you don’t take this from isiah brown. What an sad move. My advice jump ship on this one. It going to take a hit and you can’t afford to lose views. Stop… Read more »

I get it they are going to cash it out for all it’s worth. And do an transfer move. Example every an Grand per episode on 51 more episodes if it makes that Manny more it switch networks. If it gets cancelled before that if they pay for some they can work out an deal for the rights. And that network will launch an different unrelated version once an different batwoman movie air that is big.

I can’t believe they’re doing a 3rd season…major overhaul required! Look, I get that shows like Arrow & The Flash, along with movies like Avengers, Ironman, etc. are in part aimed at new potential viewers & those that new to the genre. However, the biggest reason to make a cape shows is because of their huge following. Who makes up that following? The people that have supported the source material, and want to see their pages comes to life. I get that cape shows will take a bit from here, pluck from there, as the amount of source material is… Read more »

Please cancel this garbage show ASAP !! it’s such a cringe-fest, even Supergirl looks half decent in comparison :p

Hoping they cancel it and wether its part of dc superhero slate wont matter as they have cancelled others after only a season or 2.

He is talking about the CW “Arrowverse” shows….and none of them have been cancelled/discontinued before a 4th season so far (Black Lightning ends after season 4).
And I hope that it will get more seasons.