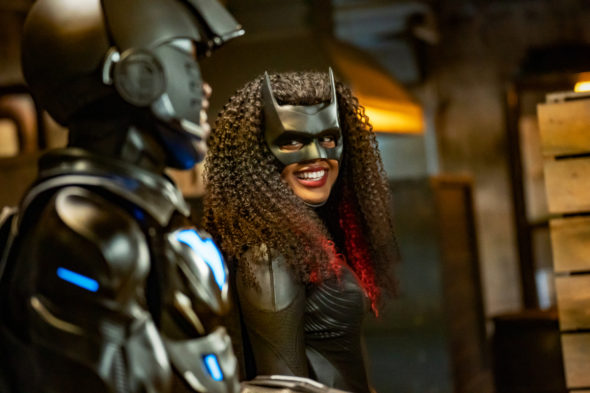 Batwoman wrapped its third season on CW this week, and viewers are wondering if the DC superhero series will return for a fourth season. Starring Javicia Leslie, Rachel Skarsten, Meagan Tandy, Nicole Kang, Camrus Johnson, Victoria Cartagena, Robin Givens, and Nick Creegan, the action-adventure series follows Batwoman and her friends as they fight crime in Gotham.

Caroline Dries said the following about the future of Batwoman, per TV Line:

“I think you can tell by how the stories come to a satisfying conclusion that if this were the end, it feels like we’ve answered enough questions and then also created one big question. That was important to me because the show and each of these individual characters are so important to me that I wanted to give them their due finale moment.”

The CW series did end with a small cliffhanger. A mystery person killed someone in the final moments. Dries said the following about what could happen in a possible fourth season:

“If we don’t get a Season 4, in my mind, it’s just to show Batwoman has to fight another day [and] that it’s never going to go away. And then if we were to get a Season 4, I have a very specific character in mind of who it could be, but it requires getting some approvals.”

What do you think? Do you want to see a fourth season of Batwoman on The CW?

This show doesn’t deserve to end on a cliffhanger. Everybody sign up on this petition, please.
https://www.change.org/p/savebatwoman

It’s hard to believe this
mess is still on the air.

I love batwoman series and it’s the highlight of my evenings. I think there definitely needs to be another season. At least 2 more. It seems every time A good show gets aired, they cancel them early. I mean there are some crappy series that get up to 10 seasons aired. I can’t see for the life of me why? Please bring Batwoman back.

This show was never great to begin with. Most cw super hero series have gone so down hill. Superman and Lois is the only one on the cw worth watching. The ratings for batwoman are very low. I don’t know why it wasn’t cancelled a long time ago. The writers don’t know what they are doing. Please put it out of its misery. Is it worth it to lose money for bad ratings?

Yes, please. I’d like to see a fourth season of Batwoman.

I have to admit that I was dubious of this show surviving another season. But…I think that this has been the best season of the three. Season One was all intro and with an actress that was not comfortable with the character IMO. Season two was starting over and another set of intros and trying to make the replacement fit into the Bat world. Season Three, we finally get some solid stories. Derivative, basing most of the threats on old Batman villians, admittedly. But still quite entertaining. If it comes back, I will be watching. If not, I expect that… Read more »

The show sucks. DUMP IT!

Best season of arrowverse might be season 3 of Batwoman. Don’t get me wrong cw does have some great seasons of all the arrowverse but there’s something about the relationship between the old Batmans most dangerous weapons he kept impounded gives you the Nostalgia of the world’s greatest detective lose for a new generation of the deranged. At first I’m not gonna lie I hated batwoman, I didn’t like ruby rose as the replacement. To be honest I only watched because of Alice and the bat team. Just ruby rose was like a robot. So after season 1 I wasn’t… Read more »

I’m surprised it got that far.