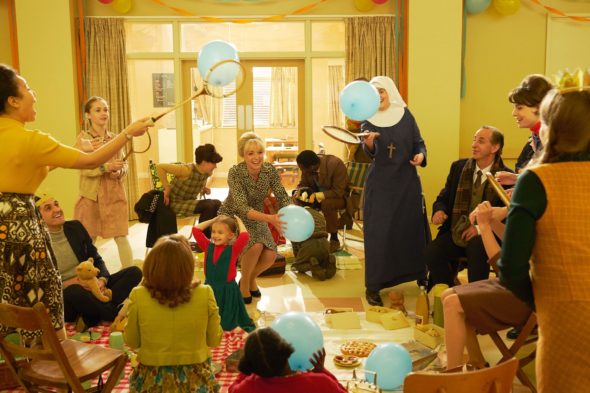 What does the future hold for Nonnatus House? Has the Call the Midwife TV show been cancelled or renewed for a ninth season on PBS? The television vulture is watching all the latest cancellation and renewal news, so this page is the place to track the status of Call the Midwife, season nine. Bookmark it, or subscribe for the latest updates. Remember, the television vulture is watching your shows. Are you?

Because American public television is supported by “Viewers like you,” rather than ads, ratings aren’t all that useful a measure for predicting whether PBS will cancel or renew Call the Midwife for season nine. As with many PBS TV series, this is originally a British program. In UK, Call the Midwife was renewed through season 11 on BBC One, back in in March of 2019, so it’s likely to be renewed by PBS, too. Still, I’ll keep an eye on the trades for any news about this series. Subscribe for free Call the Midwife cancellation or renewal alerts.

What do you think? Do you feel certain PBS will renew the Call the Midwife TV series through season nine and beyond? How would you feel if PBS dropped this TV series, instead?

It is such a good show and I would be very sad if it was gone.

YES, ONE OF THE BEST SHOWS EVER.