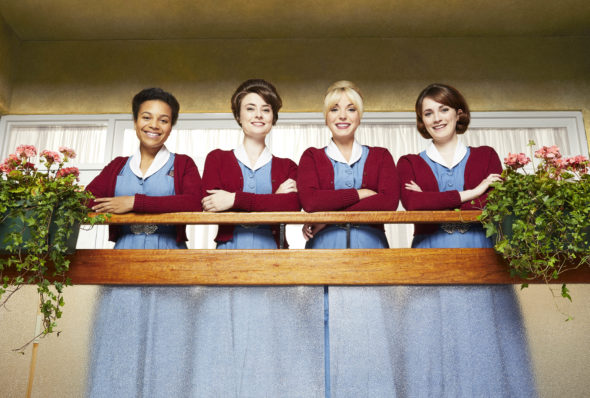 How is life in London’s East End, during the seventh season of the Call the Midwife TV show on PBS? As we all know, the Nielsen ratings typically play a big role in determining whether a TV show like Call the Midwife is cancelled or renewed for season eight. With public television TV series, other factors come into play. Because many viewers feel frustration when their viewing habits and opinions aren’t considered, we’d like to offer you the chance to rate all of the Call the Midwife season seven episodes here. *Status update below.

A PBS historical drama based on the memoirs of Jennifer Worth, Call the Midwife stars Jenny Agutter, Judy Parfitt, Helen George, Laura Main, Stephen McGann, Cliff Parisi, Victoria Yeates, Charlotte Ritchie, Linda Bassett, Jennifer Kirby, Annabelle Apsion, and Leonie Elliott. The post-WWII series centers on the midwives and nuns at Nonnatus House, in the Poplar district of London’s East End. In the seventh season, West Indian nurse Lucille Anderson (Elliott) arrives in Poplar. There, she and the rest of the staff must rise to the challenge of helping unmarried mothers, as deal with threats including leprosy, tokophobia, and stroke resulting from Huntington’s chorea.

What do you think? Which season seven episodes of the Call the Midwife TV series do you rate as wonderful, terrible, or somewhere between? Should PBS cancel or renew Call the Midwife for an eighth season? Don’t forget to vote, and share your thoughts, below.

3/4/19 update: The Call the Midwife TV show has been renewed through season 11.

Having been a Nurse’s Aide in Mother/Baby for 13 years, I believe I’m in a position to say that “Call the Midwife” is the best TV series. Different from what I experienced is the personal stories of the patients’/families giving this show it’s depth.

I purchased all 8 seasons and plan on purchasing Season 9. Keep up your marvelous acting and stories. Keep “Call the Midwife” coming!

We love call the Midwife it is entertaining and inspirotial

Please please renew Call the Midwife for Season 8. It is one of the best series ever!!!

Call the Midwife is one of the shows on TV anywhere. It MUST go on to the next season!!! PLEASE RENEW!!!