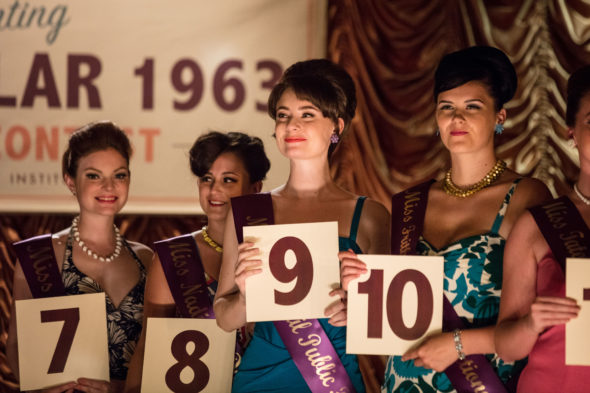 Is Nonnatus House still in operation? Has the Call the Midwife TV show been cancelled or renewed for an eighth season on PBS? The television vulture is watching all the latest cancellation and renewal news, so this page is the place to track the status of Call the Midwife, season eight. Bookmark it, or subscribe for the latest updates. Remember, the television vulture is watching your shows. Are you?

A PBS historical drama based on the memoirs of Jennifer Worth, Call the Midwife stars Jenny Agutter, Judy Parfitt, Helen George, Laura Main, Stephen McGann, Cliff Parisi, Victoria Yeates, Charlotte Ritchie, Linda Bassett, Jennifer Kirby, Annabelle Apsion, and Leonie Elliott. The post-WWII series centers on the midwives and nuns at Nonnatus House, in the Poplar district of London’s East End. In the seventh season, West Indian nurse Lucille Anderson (Elliott) arrives in Poplar. There, she and the rest of the staff must rise to the challenge of helping unmarried mothers, as deal with threats including leprosy, tokophobia, and stroke resulting from Huntington’s chorea.

Because American public television is supported by “Viewers like you,” rather than ads, ratings aren’t all that useful a measure for predicting whether PBS will cancel or renew Call the Midwife for season eight. As with many PBS TV series, this is originally a British program. In UK, Call the Midwife was renewed through season nine on BBC One, back in November of 2016. After seven seasons on the air, stateside, its highly unlikely that PBS will drop it, before it ends its natural run. I’m certain enough that PBS will renew it for season eight, that I’m seeking my supper somewhere else. Still, I’ll keep an eye on the trades for any news about this series. Subscribe for free Call the Midwife cancellation or renewal alerts.

3/4/19 update: The Call the Midwife TV show has been renewed through season 11.

What do you think? Are you glad that PBS will air season eight of the Call the Midwife? How would you feel if PBS dropped this TV series, instead?

We LOVE “Call the Midwife” and look forward to watch it in 2020. Thank you!

One of the best series ever on Netflix. Please dont cancel!

Love the show. I’ve finished season 8 and am now trying to find something comparable to watch until new seasons come. Was sad to have it end, same as I felt about Downton Abbey. Both were well done, good story lines, good actors.

I have loved this show from the first season. I find it heart-breaking to see the show, that has delivered and cared for babies to turn pro-abortion. Babies are always a precious gift. I wish they would have shown the help the woman could have gotten, instead of having an abortion. I’m sure there were places and people to help or adoption agencies. The saddest part was that the mother who died was mourned, but the poor baby, who was killed by it’s own mother, was not even mentioned. There was no sorrow for a child that never had the… Read more »

I’m only getting 2 episodes for season 8, just Christmas part 1and 2. Why am I not getting more?

Please don’t cancel! I love it!!

I love it!! Lots more please!

Please do not cancel this show, I love it.

I think this is my favorite show of All Time! I don’t want it ever to end Please keep it going!

Cannot wait for Season 8!! Miss all my dear friends from Nonartus House

BBC already announced that they’ve ordered three more seasons and each one will have a special Christmas Episode, which guarantees the show at least through 2020. Now, I don’t know if PBS has picked up all three seasons. However, you can rest assured that Netflix will air every season. Season Eight has already finished filming.

OMG we LOVED LOVED LOVEDD that show its part of why we donate to PBS so HOPING it goes on we even like the after commentary on set nuances!!!