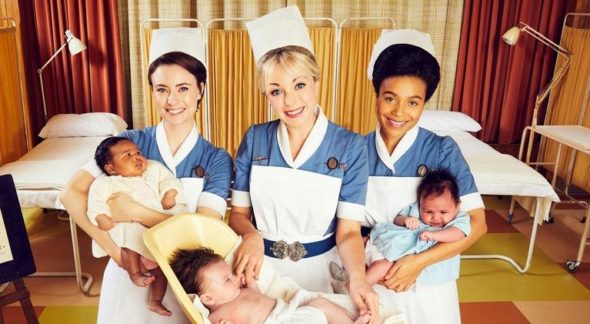 Are you enjoying the Swinging Sixties at the Nonnatus House during the eighth season of the Call the Midwife TV show on PBS? Although the Nielsen ratings typically play a big role in determining whether a TV show like Call the Midwife is cancelled or renewed for season nine, with public television TV series, other factors come into play. Because many viewers feel frustration when their viewing habits and opinions aren’t considered, we’d like to offer you the chance to rate all of the Call the Midwife season eight episodes here.

What do you think? Which season eight episodes of the Call the Midwife TV series do you rate as wonderful, terrible, or somewhere between? Since the BBC has commissioned the show through season 11, should PBS cancel or renew Call the Midwife for a ninth season? Don’t forget to vote, and share your thoughts, below.

I really enjoy this show a lot, especially as I was born in the mid-50s & grew up during the time period covered by Call The Midwife, though my experiences are quite different because of having grown up in the U.S. & because our nation’s war & postwar experience was very different than that in Britain & especially London, particularly the lower East End where this program takes place. I even enjoy watching reruns of the program, especially enjoying the clothing, hairstyles & interiors/bric-a-brac & music of the times – it brings back such wonderful memories! Also, where I grew… Read more »

Excellent series -very well written and a really good, believeable cast. Never mind about series 10 and 11 and two more Christmas specials; that will take us to the end of 1967. I want more!!

Please do not cancel Call the Midwife. It is such a heartwarming and sometimes heartbreaking show with lots of history in it.