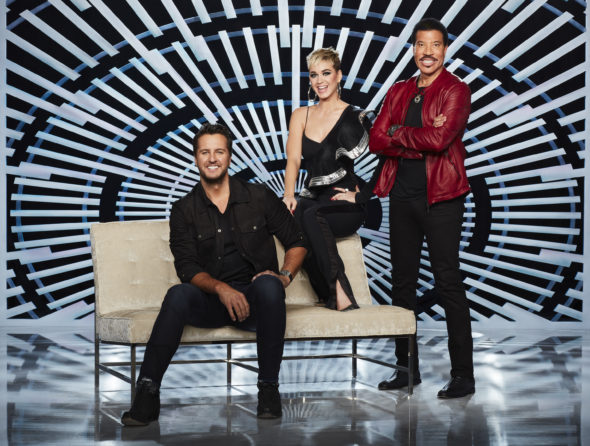 Is the 17th season of the American Idol TV show on ABC hitting all the right notes? As we all know, the Nielsen ratings typically play a big role in determining whether a TV show like American Idol is cancelled or renewed for season 18. Unfortunately, most of us do not live in Nielsen households. Because many viewers feel frustration when their viewing habits and opinions aren’t considered, we’d like to offer you the chance to rate all of the American Idol season 17 episodes here. **Status update below.

An ABC revival of the old FOX reality TV series music competition, American Idol typically airs on Sundays and Mondays. Returning are Lionel Richie, Katy Perry, and Luke Bryan as judges and Ryan Seacrest as host. Bobby Bones joins them in season 17 as the official in-house mentor, an expansion of the role he played last year for the Top 24. After making it through the nationwide audition process, the contestant pool narrows through a series of elimination rounds. Once the contest reaches the semi-finals, although the judges offer their criticism, the decision to keep or cut a performer is up to the viewing audience. For a specified window of time, fans may vote for their favorites, via phone call, text messages, and online. At stake is the “American Idol” title and a recording contract.

What do you think? Which season 17 episodes of the American Idol TV series do you rate as wonderful, terrible, or somewhere between? Should ABC have cancelled or renewed American Idol for an 18th season? Don’t forget to vote, and share your thoughts, below.

Please renew American Idol. It is a fun, entertaining show the whole family can watch. Love Katy and the other two judges are good too. This has been an eclectic season, but different is good at times. I helps our musical growth.

Dumbest show they ever brought back! All the singers are wonderful..I mean really??? So they can’t hit the notes correctly, who cares…again really???? Katy Perry is annoying but I love Lionel~! And whatever happened with Ryan Seacrest’s sexual harassment claims? Please don’t renew this show.

I think they should cut out all but one show of the auditions in order to give us more time to see the final 20 grow in their abilities. I think it’s not fair to the viewers to eliminate 4+ people in one night before we the viewers get a chance to vote and more importantly to see each singers growth. I’d rather see less audition shows and more of the top 20 with from that point at most 2 going home in a given night and there should be an “America save” where u let us vote on someone… Read more »

Please NEVER cancel this show. My family and myself have been watching since Season 1. The best show on TV. I wish it started in January as in seasons 1 through 15. Always keep Ryan as the host. He is American Idol.

This year is so much better
The talent is the best. The judges are human. Please don’t cancel this show. All of the family is loving it.