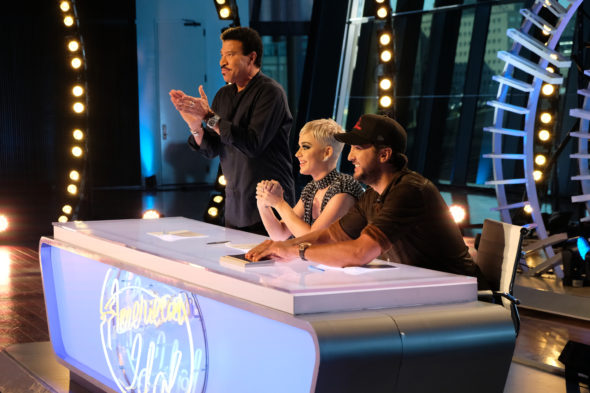 Is the 16th season of the American Idol TV show on ABC music to your ears? As we all know, the Nielsen ratings typically play a big role in determining whether a TV show like American Idol is cancelled or renewed for season 17. Unfortunately, most of us do not live in Nielsen households. Because many viewers feel frustration when their viewing habits and opinions aren’t considered, we’d like to offer you the chance to rate all of the American Idol season 16 episodes here.

An ABC revival of the old FOX reality TV series music competition, American Idol typically airs on Sundays and Mondays. Lionel Richie, Katy Perry, and Luke Bryan serve as judges in season 16 on ABC, with Ryan Seacrest returning as host. After making it through the nationwide audition process, the contestant pool is narrowed through a series of elimination rounds. Once the contest reaches the semi-finals, although the judges offer their criticism, the decision to keep or cut a performer is up to the viewing audience. For a specified window of time, fans may vote for their favorites, via phone call, text messages, and online. At stake is the “American Idol” title and a recording contract.

What do you think? Which season 16 episodes of the American Idol TV series do you rate as wonderful, terrible, or somewhere between? Should ABC cancel or renew American Idol for a 17th season? Don’t forget to vote, and share your thoughts, below.

I really like the original American Idol. However I cannot vote for a show to stay on that is taking away from one of my favorite shows. The show is made Dancing with the stars go down to four weeks during the Spring and that was just a tease. Hope they will switch the show to another night so DWTS fans can enjoy a full season.

I think the judges are wrong to continuously pointing out who they thing should wing. Gabby is okay but not my choice the judges can have their choice just keep it to themselves

I love American Idol an I’m so glad it’s back. Unfortunately I am one that has to watch next day on Hulu an we are not counted in the Nielsens, which is unfortunate. There are many of us that watch that way. We have untied the cord. Therefore our fave shows 3nd up canceled because the powers that be don’t count us. That’s what happened on ABC with the soaps. You don’t care about your fans.