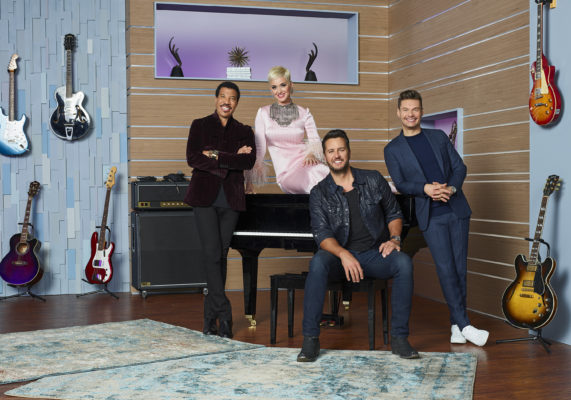 Is there music in the air? Has the American Idol TV show been cancelled or renewed for an 18th season on ABC? The television vulture is watching all the latest cancellation and renewal news, so this page is the place to track the status of American Idol, season 18. Bookmark it, or subscribe for the latest updates. Remember, the television vulture is watching your shows. Are you?

An ABC revival of the old FOX reality TV series music competition, American Idol typically airs on Sundays and Mondays. Returning are Lionel Richie, Katy Perry, and Luke Bryan as judges and Ryan Seacrest as host. Bobby Bones joins them in season 17 as the official in-house mentor, an expansion of the role he played last year for the Top 24. After making it through the nationwide audition process, the contestant pool narrows through a series of elimination rounds. Once the contest reaches the semi-finals, although the judges offer their criticism, the decision to keep or cut a performer is up to the viewing audience. For a specified window of time, fans may vote for their favorites, via phone call, text messages, and online. At stake is the “American Idol” title and a recording contract.

The first night (Sundays) of the 17th season of American Idol averaged a 1.32 rating in the 18-49 demographic and 7.56 million viewers. Compared to the season 16 Sunday editions, that’s down by 21% in the demo and down by 5% in viewership.

The second night (Mondays) of season 17 averaged a 1.16 rating in the 18-49 demographic with 6.54 million viewers. Compared to the season 16 Monday editions, that’s down by 27% in the demo and down by 16% in viewership. Find out how American Idol stacks up against other ABC TV shows.

Will ABC cancel or renew American Idol for season 18? The ratings are down but it’s still doing decently for the network. I’m sure it will be renewed. I’ll update this page with breaking developments. Subscribe for free American Idol cancellation or renewal alerts.

What do you think? Should the American Idol TV show have been renewed for season 18? How would you feel had ABC cancelled this TV series, instead?

I was going to see March 31 episode Wich was just on two days ago but saw it was 3 hours long. So you have two wacth it in parts on because it hard to keep your interest in it. It made me think maybe that a sign this show is starting to run it coruse. I mean they brought Caite Trunner as an guess earlier this season to get people to keep watching.