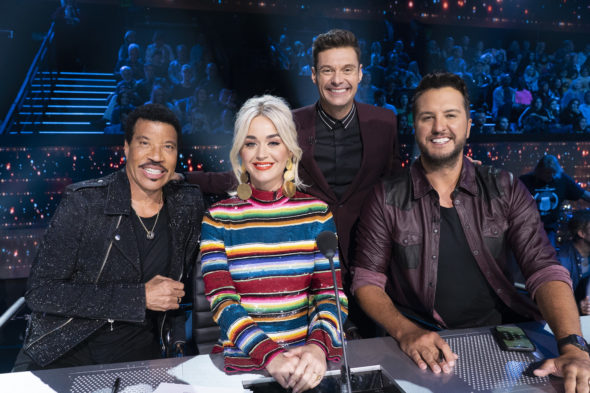 The ratings aren’t what they used to be but ABC is still singing the praises of American Idol. The alphabet network has renewed the reality TV series for an 18th season, the show’s third on ABC. The new season’s judges have not been announced as yet.

A revival of the FOX music competition, American Idol typically airs on Sundays and Mondays. Returning for season 17 were Lionel Richie, Katy Perry, and Luke Bryan as judges and Ryan Seacrest as host. Bobby Bones joined them as the official in-house mentor, an expansion of the role he played last year for the Top 24. After making it through the nationwide audition process, the contestant pool narrows through a series of elimination rounds. Once the contest reaches the semi-finals, although the judges offer their criticism, the decision to keep or cut a performer is up to the viewing audience. For a specified window of time, fans may vote for their favorites, via phone call, text messages, and online. At stake is the “American Idol” title and a recording contract.

The first night (Sundays) of the 17th season of American Idol is averaging a 1.31 rating in the 18-49 demographic and 7.41 million viewers. Compared to the season 16 Sunday editions, that’s down by 21% in the demo and down by 7% in viewership.

What do you think? Do you enjoy the American Idol TV show? Will you be watching season 18 of this ABC series?

Enjoyed season 17 & will watch season 18! Best season so far. Looking forward to season 18!! Love the judges and the fun everyone has!!

I stopped watching this a while ago, but picked it up this season…best ever!!! We won’t see this much talent again ! Not sure if I will watch next season.

I love American Idol! Katy, Luke and Lionel are the best judges the show has ever had & I’ve watched every season. If the show lost Ryan though I think it would lose too many fans to continue. Bobby is awesome too!

I want a new season of American Idol. Lionel Richie should stay. Katie Perry and Luke Bryan should
go. That save of Laci was terrible.