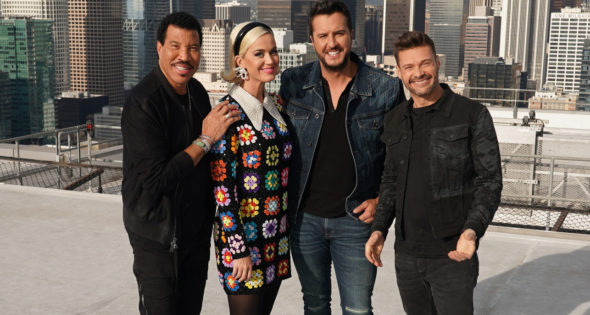 American Idol is getting ready to start production on season 19 (the show’s fourth season on ABC) and, though auditions are being held in a new way, a portion of the competition series won’t change. The judges and host of the series are all returning for another season. Judges Luke Bryan, Katy Perry, and Lionel Richie will all be back, as will host Ryan Seacrest.

ABC revealed more about the returns in a press release.

“American Idol has always been able to bring people together, entertain and inspire – and I am so proud of how this show continued to deliver joy and laughter into people’s homes during a time when we needed it the most,” said Karey Burke, president, ABC Entertainment. “There is no one who we feel more confident about leading us into a new season of high notes than Luke, Katy, Lionel and the incomparable Ryan Seacrest.”

“Katy, Lionel and Luke are fun, astute and really know how to spot talent,” said executive producer and showrunner Trish Kinane. “Their chemistry is undeniable, and we are delighted that they, along with host Ryan Seacrest, are returning to find the next superstar and take ‘American Idol’ to new heights next season.”

“We are so grateful to the fans for sticking with us – and pushing us to No. 1 – during this most challenging of times. And we are thrilled to be able to welcome Ryan, Katy, Lionel and Luke back to help us discover our next American Idol,” said executive producer Eli Holzman, CEO of 19 Entertainment’s parent company Industrial Media. “At times like these, it is more important than ever to give families wholesome entertainment, packed full of hope, talent and inspiration – where dreams come true. And that is what ‘American Idol’ is all about.”

The search for the next singing sensation is currently underway with “Idol Across America” remote virtual auditions taking place across all 50 states. “Idol Across America” will give hopefuls the chance to showcase their talents from anywhere in America, across any official audition date and face-to-face with an “American Idol” producer, staying true to its roots by providing aspiring Idols real-time feedback on their journey to being crowned the next American Idol.”

Season 19 of American Idol will return sometime in 2021 on ABC.

What do you think? Are you a fan of American Idol? Are you glad that the judges are all returning to this ABC series?

I am a fan and I’m glad the judges are returning.

No that show has run it’s course !

Hell, Yes, I am glad that 3 judges and Ryan Seacrest return to the show. Good luck with the newest season.