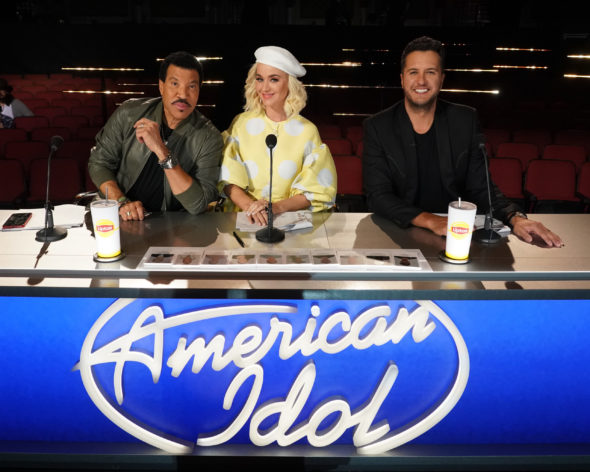 American Idol is shutting things down. The series has canceled rehearsals and sent contestants home just two weeks before the live performances are set to begin.

Deadline reported that Fremantle is allowing editors to continue editing the already taped episodes at home. A decision about the live performances has not been made yet. They may go forward, but it would be without a live audience.

The live episodes are set to start on Monday, March 30. The Monday episodes of American Idol just started airing this week with the journey to Hollywood just beginning for the contestants.

Deadline revealed that “there will likely need to be additional modifications made for those shows to proceed amid a pandemic. It is conceivable that the producers and ABC could use additional existing footage for an extra episode or two to buy themselves some time while they evaluate the situation and make a final decision whether to proceed with live shows and, if they do, in what shape or form.”

What do you think? Are you surprised American Idol has shut down rehearsals?

I don’t understand why it didn’t come on last night. It already pre recoded. It should have came on. Don’t do the live show right now but, come on something that already recoded they didn’t show.

Good for them, protecting the judges, contestants and the crew, looking forward to another season of so far some talented singers..good job judges.

No ! They have to take care of themselves as should everyone! The people come from ALL OVER , it is smart .

I’m not surprised at this news but believe they can come up with a workaround to keep the show moving ahead. I worry most about the contestants and the production crew. This program has a big following and think can send positive messages on complying with the protections recommended buy health officials.

Well I think it’s a very good idea that they do cancel because of the Coronavirus … safety for everyone involved… American Idol show will be missed but we need to be very very careful… and this will show that young people how important and how very serious Coronavirus! is..because it seems like a lot of young people don’t think is serious!!.. would be a great example to realize they also have to pitch in and stay home to help and be part of the healing! thank you everyone please! be safe! God bless

Instead of being sad I will be inspired. This year there are many new idols and maybe we should just keep them all! One thing for sure, each one of them were inspired by the careful and tender words given to them by these wonderful judges, so many songwriters! Thank you Lord.

I think american idol was so disrespectful to one of the contestants ,the guy wasn’t given the opportunity to sing ,they just played him like a fool by telling him to go warm up first an was escorted out the building , shame on you lionel richie shame on you..

They should do what is reasonable and put the show on hiatus for a while, maybe highlights from past seasons just to buy them some time. At least that’s what most networks around the world are doing. Here in Brazil, they’re airing reruns of shows that were huge hits back then.

I am disappointed but not surprised. The contestants are always in close proximity so it would follow to suspend the auditions. Too bad…there were some amazing contestants this season.

I think safty for all should be a concern at this time ! Also because of Katy Perry’s pregnancy!!

Everyone needs to be on board, in order to rid this pandemic as soon as possible. We are all in this together, and have a “new normal.” In as much as I am a fan of American Idol, it should definitely not proceed as usual in support of how we all should be doing our part.

I think it was a smart and responsible decision. Lives will be saved

I do not care I don’t watch it

If you don’t care ,then why are you writing on this subject.

Well thank you for being you eh?

I agree they should shut things down, to show support for every other business that has done so in light of getting a head of this virus. Do the show without a live audience. IT’s different but will work

As highly inconvenient as a lot of these cancellations have been for people, I respect that people are taking this seriously at least.