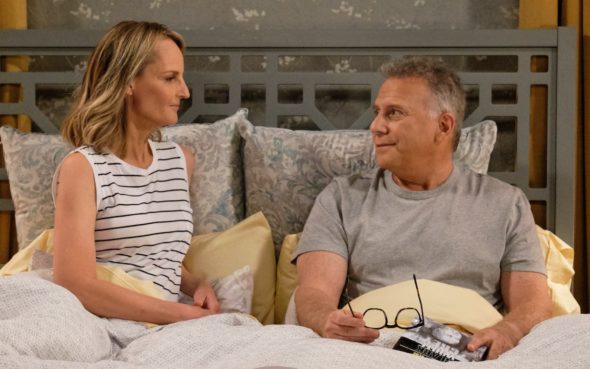 A revival of the comedy series created by Paul Reiser and Danny Jacobson, Mad About You stars Paul Reiser, Helen Hunt, John Pankow, Richard Kind, Abby Quinn, and Anne Ramsay. In its original seven-season run on NBC, the sitcom revolves around the relationship of newlyweds Paul Buchman (Reiser), a documentary filmmaker, and Jamie Stemple Buchman (Hunt), a public relations specialist. The couple’s family and friends include Lisa Stemple (Ramsay), Jamie’s neurotic older sister; Paul’s close friend and cousin, Ira Buchman (Pankow); and friend Doctor Mark Devanow (Kind). In the Spectrum Originals revival, the story picks up many years later, with Paul and Jamie dropping daughter Mabel (Quinn) off at a nearby college. The couple enters a new phase of their lives, as empty-nesters.

What do you think? Which season eight episodes of the Mad About You TV series do you rate as wonderful, terrible, or somewhere between? Do you think that Mad About You on Spectrum Originals should be renewed for a ninth season? Don’t forget to vote, and share your thoughts, below.

Loved every single episode in the reboot! Please yes to more!

I just watched all the espiodes and loved them all. Please do another season it was like they picked up right where they left off.

We just binge watched all the episodes in Season 8 of Mad About You and loved them all. We laughed out load so many times and that just doesn’t happen for us with other shows. Please do another season!

Please make more episodes, 12 is NOT enough! We want more! Spectrum you are dropping the ball and frankly are stupid for not taking the opportunity to make more episodes! So many people want it to be a continued series and want the series to go on Just like the original series for 7+ seasons! Especially during this pandemic it gives us a “family” to be with during this difficult time! If you DON’T bring it back then everyone there at spectrum are just stupid and should be fired!

Just found the 8th season of Mad About You. Loved the original series, and season 8 was very well done for a reboot. Great themes really hit home. I hope you decide to make a 9th season.

This is the one reboot we have waited decades for and I was thrilled to see it on Prime. I had no clue nor do I have access to spectrum. I am searching for more episodes and anticipate more from the Buchmans and their friends and family. The chemistry and wit is so natural and normal. Please bring more back.

Loved the original and loved the reboot. I’ve talked to many people who want to see it bit don’t have access to Spectrum. Please make it more broadly available and keep it going!

Please more episodes but not on cable TV

Mad About you is still relatable . Still love this show! The Toothpick episode had me in stitches ,as years ago my husband & I had the very same conversation. Now our generation are facing lives changes.We are being forced, just as we did throughout the busy years to evolve to keep surviving.