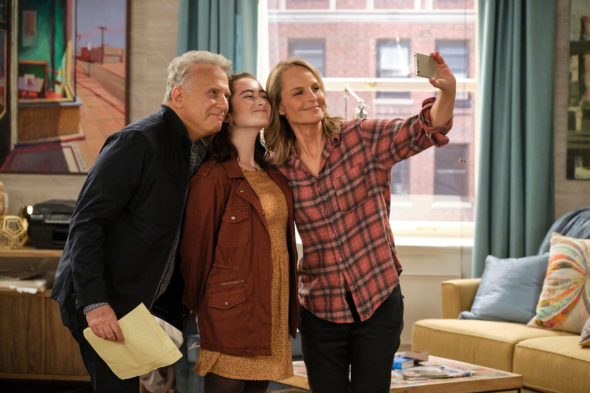 Are Paul and Jamie still crazy about each other? Has the Mad About You TV show been cancelled or renewed for a ninth season on Spectrum Originals? The television vulture is watching all the latest cancellation and renewal news, so this page is the place to track the status of Mad About You, season nine. Bookmark it, or subscribe for the latest updates. Remember, the television vulture is watching your shows. Are you?

A revival of the comedy series created by Paul Reiser and Danny Jacobson, Mad About You stars Paul Reiser, Helen Hunt, John Pankow, Richard Kind, Abby Quinn, and Anne Ramsay. In its original seven-season run on NBC, the sitcom revolves around the relationship of newlyweds Paul Buchman (Reiser), a documentary filmmaker, and Jamie Stemple Buchman (Hunt), a public relations specialist. The couple’s family and friends include Lisa Stemple (Ramsay), Jamie’s neurotic older sister; Paul’s close friend and cousin, Ira Buchman (Pankow); and friend Doctor Mark Devanow (Kind). In the Spectrum Originals revival, the story picks up many years later, with Paul and Jamie dropping daughter Mabel (Quinn) off at a nearby college. The couple enters a new phase of their lives, as empty-nesters.

Will Spectrum Originals cancel or renew Mad About You for season nine? The show was beloved in the 1990s but doesn’t seem to be widely remembered today. Plus, the revival’s only available to Spectrum customers so I can’t see it getting a large audience. It seems like this revival is intended as a one-and-done so I wouldn’t hold your breath waiting for a renewal. I’ll update this page with breaking developments. Subscribe for free alerts on Mad About You cancellation or renewal news.

What do you think? Do you hope the Mad About You TV show will be renewed for a ninth season? Would you like to see more of the Spectrum Originals revival?

Ohhhhhh my gosh! My husband and I just found the new Mad About You.
I was over the top to see Paul, Jamie, Ira, Lisa, and the others. No Fran:( but still I can not believe this! So awesome!!!!

Now I’m seeing only one season?
Yes please do more seasons!
My favorite sit com of all time!

Definitely renew. Gen Xers are going through what they are. This is a show WE can relate to. The chemistry between Hunt and Reiser is phenomenal as always.

The Mad About You reboot made me laugh out loud like no other show. Please renew the show for another season!

I LOVE this show. Their chemistry is delicious and Mable is perfection! Puleeeeees!

Yes, renew it!! It was a big favorite of mine and I never missed an episode! I loved the reboot and would watch it!!

Loved the reboot of Mad About You. We need some light, funny and entertaining programs. I’m sick of the current programming

The mad about you reboot is fantastic and is so good that it needs to be more mainstream. So funny characters, same great chemistry and comedic timing, this is much better than all the new comedy shows I see on the major networks. Please bleep making it!

Yes! My thirty something year old kids watched all the original series and they thought they were hilarious! The reboot was just as funny. Please continue making the reboot!

Loved the original, and love the reboot. Chemistry is still there, like we never left. So very relatable. So hoping for another (ninth) season!

I love the rebooted version, Paul an Helen still have that magical chemistry! I am going thru personal trials and Mad About You picks my spirits up, makes me laugh, just what I need right now. To cancel them would be criminal.