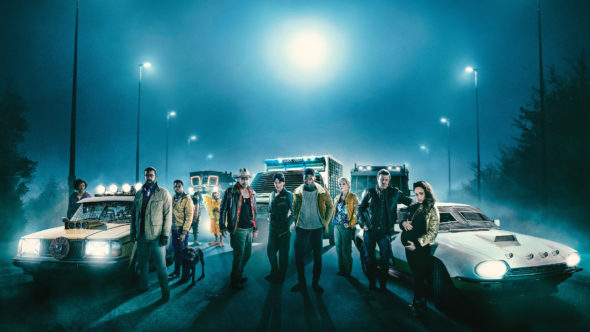 A Spectrum Originals dystopian action drama, Curfew first premiered on Sky One in UK and Ireland. The series stars Sean Bean, Billy Zane, Miranda Richardson, Adrian Lester, Adam Brody, Phoebe Fox, Malachi Kirby, Harriet Walter, Michael Biehn, Robert Glenister, Aimee-Ffion Edwards, Rose Williams, Elijah Rowen, Andi Osho, Ike Bennett, Jason Thorpe, and Guz Khan. It unfolds in the near future, where a virus has devastated the UK. Chafing at the totalitarian regime’s nighttime curfew, people have instituted an illegal race, which provides participants the opportunity to race from South London to the Scottish Highlands, to escape the curfew and make a better life. This chance for freedom is only available to the winner — and there can only be one.

Will Spectrum cancel or renew Curfew for season two? The series originates in UK and Ireland, so its fate largely rests in the hands of Sky One. As we wait for news, I’ll keep an eye on the trades and press releases. Subscribe for free Curfew cancellation or renewal alerts.

What do you think? Do you hope the Curfew TV show will be renewed for a second season? How would you feel if Spectrum cancelled this TV series, instead?

so is it dead?hope not loved it

Please bring it back! I want more, it was great, and I need closure! More please!

Curfew is quite simply the greatest! the acting, the music, the special effects, the screenplay are all superb! USA viewers need to have the series available on dvd region one , so they can share and enjoy this monumental achievment. i am not sure a season two sequal would ever be able to match season one, with the loss to the script of characters lou collins, Ruby, herold, Helen newman, and simon donahue, among others.

I finally got the chance to watch and had no idea what it was about. Loved it great story great new fresh look at the Zombie genre, and I hope there is a season 2. Oh ya don’t let America have this one they have screwed up enough of great English shows I should know I live here. Michigan USA

Please renew for season 2 of Curfew

I love the show. Its everything thats been missing from tv for a long time. I really want season two.

I loved curfew it was everything I love in a series. I was on edge excited scared and laughed so hard. I’m actually keeping my finger’s crossed that the there will be another race. And maybe some glimpses of the first winners on the actual island would be awesome.

Oh what a great idea. I was just wondering if anyone from season one would be on. Second season.. but showing the first seasons winners on “the island” would be a great way to start season 2.

We enjoyed season 1 of Curfew. We are anxiously looking forward to a Season 2. Please bring it back.