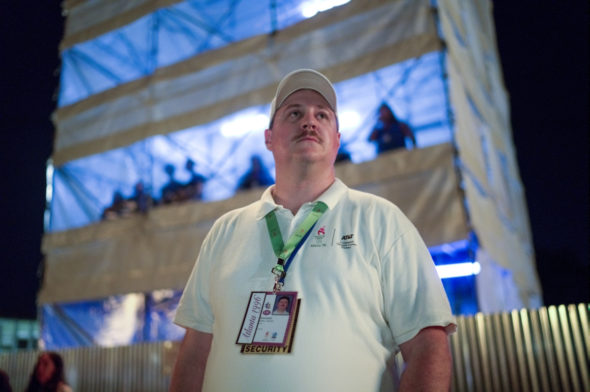 Will justice be served? Has the Manhunt TV show been cancelled or renewed for a third season on Spectrum Originals? The television vulture is watching all the latest cancellation and renewal news, so this page is the place to track the status of Manhunt, season three. Bookmark it, or subscribe for the latest updates. Remember, the television vulture is watching your shows. Are you?

Originally released on Spectrum’s On Demand platform, the second season of Manhunt, is subtitled Deadly Games. The second season of this true-crime anthology series stars Cameron Britton, Jack Huston, Gethin Anthony, Carla Gugino, Arliss Howard, Kelly Jenrette, and Judith Light. Season two follows one of the most complex manhunts on American soil following the deadly terrorist attack at the 1996 Olympic Games in Atlanta. Security guard Richard Jewell (Britton) is lauded as a national hero after he discovers a massive bomb at the Games and saves hundreds of lives by clearing the area. However, his public identity as a brave citizen quickly erodes when the FBI and the news media, led by driven crime reporter Kathy Scruggs (Gugino), falsely accuse him of being the bomber. As Jewell and his mother Bobi (Light) fight to clear his name, the real perpetrator, Eric Rudolph (Huston), remains at large and undetected as he carries out a series of bombings.

The second season of Manhunt averaged a 0.24 rating in the 18-49 demographic and 1.54 million viewers on CBS (where it was re-run). Find out how Manhunt stacks up against other CBS TV shows.

Will Spectrum Originals cancel or renew Manhunt for season three? The first season of Manhunt (aka Manhunt: Unabomber) aired on Discovery Channel in 2017. The anthology series moved to Spectrum’s on-demand service for its standalone second season where it was seen by a limited audience in February 2020. Because the COVID-19 pandemic caused a delay for the production of CBS’ regular shows, the network picked the rights to air season two for Fall 2020. With this convoluted history, it’s difficult to know if this show is considered a financial success but, CBS paying to air season two doesn’t hurt. If the network wanted to air additional seasons, that wouldn’t hurt either but we’ll have to wait and see.  I’ll update this page with breaking developments. Subscribe for free alerts on Manhunt cancellation or renewal news.

What do you think? Do you hope the Manhunt TV show will be renewed for a third season on CBS or Spectrum? How would you feel if this TV series was cancelled instead?