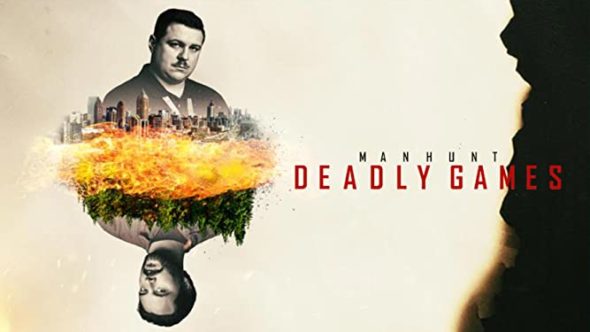 The first season of Manhunt (aka Manhunt: Unabomber) aired on Discovery Channel in 2017. The anthology series moved to Spectrum’s exclusive channel for its second season where it was seen by a limited audience. Because COVID-19 has caused a delay for the production of CBS’ regular shows, the network picked up the rights to air season two. Will the additional exposure and revenue help Manhunt be renewed for a third season, with a new true-crime tale or, will it be cancelled? Could Manhunt return to CBS if the ratings are strong enough? Stay tuned.

A true-crime anthology series, the second season of Manhunt, subtitled Deadly Games, stars Cameron Britton, Jack Huston, Gethin Anthony, Carla Gugino, Arliss Howard, Kelly Jenrette, and Judith Light. Season two follows one of the most complex manhunts on American soil following the deadly terrorist attack at the 1996 Olympic Games in Atlanta. Security guard Richard Jewell (Britton) is lauded as a national hero after he discovers a massive bomb at the Games and saves hundreds of lives by clearing the area. However, his public identity as a brave citizen quickly erodes when the FBI and the news media, led by driven crime reporter Kathy Scruggs (Gugino), falsely accuse him of being the bomber. As Jewell and his mother Bobi (Light) fight to clear his name, the real perpetrator, Eric Rudolph (Huston), remains at large and undetected as he carries out a series of bombings.

10/25 update: You can see the latest night’s ratings in context.

For comparisons: Season one of Manhunt, which aired on Discovery Channel in 2017, averaged a 0.30 rating in the 18-49 demographic and 1.04 million viewers. Season two was released as a Spectrum On Demand series on February 3, 2020.

What do you think? Do you like the Manhunt TV series on Spectrum Originals and CBS? Should it be cancelled or renewed for a third season? Would you like to see it return to CBS?

after watching 8 hours they don’t seem to have any commitment to finish showing the last 2 shows. I used the link on the last comment to watch on my computer but not every one has one.

Please air the finale! We too watched 8 hours of episodes to now not watch the ending. It could easily be slotted in somewhere in lieu of reruns. Not all of us have the ability, nor the desire to watch it online on a small PC screen instead of the comfort of the living room.

Jim wheeler – that’s why I don’t like watching serial shows anymore. You follow it week by week and then in the middle of it all they pull the plug. They should be obligated to bring it to an ending.

CBS – Will you be airing Ep 9&10? I have watched the entire series so far. I understand airing election news, but please let us know if rescheduling the final 2 episodes is going to happen. Thank You!

They aired in some parts of the country and the network then released them online. I can’t see them airing them at this point.

I have been waiting for the episodes of Manhunt Deadly Games to come back on CBS, since they have been cancelled a couple of times. Why do they make dumb decisions like that. Whenever I find a show that captures my attention, suddenly they don’t show them again. These episodes were cancelled twice because of their decision. Doesn’t anyone make smart decisions any more.

CBS did NOT air the 2 episodes Saturday night because they showed Biden for 2 hrs. Will you be showing them? It’s a shame I watched all the episodes and now can’t watch last two.

At this point, it doesn’t look like CBS will air them. They are available on the CBS site however. https://www.cbs.com/shows/manhunt-deadly-games/