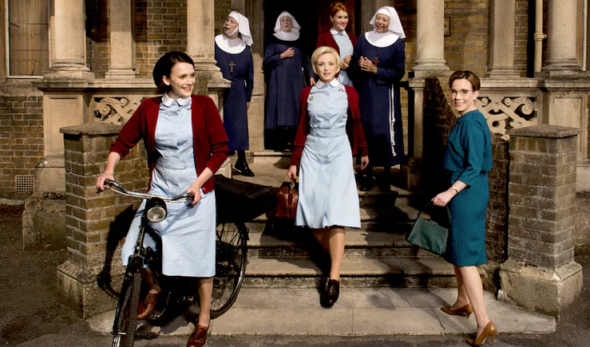 Call the Midwife is coming back soon. This week, PBS announced season seven will debut in March.

Season seven of Call the Midwife is slated to premiere on PBS on March 25th at 8 p.m. ET/PT.

Nonnatus House welcomes a new midwife, Lucille Anderson played by Leonie Elliott (Wondrous Oblivion, Danny and the Human Zoo, “Black Mirror”), the first West Indian midwife to be featured as a series regular. Elegant, compassionate and clever, Nurse Lucille is swift to settle in and brings a fresh new energy to life at Nonnatus House. Her story reflects the experiences of Caribbean nurses who traveled to the U.K. in the 1960s to support the expanding National Health Service.

Season 7 of CALL THE MIDWIFE opens as the “Big Freeze” of 1963 continues and the midwives persevere through the intense winter. The nuns and nurses of Nonnatus House are being tested as they have never been before, both personally and professionally. All around them they see the old East End vanishing, as slum clearances make way for bold new tower blocks to accommodate expanding communities. They find themselves facing a wide range of medical challenges, from breech birth to cancer, Huntington’s chorea and cataracts. Trixie and Christopher continue to develop their romance, while Tom and Barbara enjoy life as a married couple. Nurse Crane’s authority is questioned from an unexpected source, and Sister Monica Joan is forced to accept her failing faculties. Additionally, life for the Turners is turned upside down when Shelagh decides to employ an au pair.

Dame Pippa Harris, Executive Producer for Neal Street Productions said, “We are thrilled to be bringing another series of CALL THE MIDWIFE to our loyal audience in America, together with our partners at PBS. The series goes from strength to strength thanks to Heidi Thomas’s creativity and skill as a screenwriter, and the brilliance of our cast and crew.”

Creator and Executive Producer Heidi Thomas said, “CALL THE MIDWIFE is a love letter to community, family, babies, and the strength of women. We’re thrilled to be able to share Season 7 with our loyal and much-loved PBS fans.”

Season 6 of CALL THE MIDWIFE, which aired on PBS in Spring 2017, drew an average audience of 3.4 million viewers (P2+). Each of the past four seasons was among the yearly top 10 viewed programs on PBS, with Season 6 ratings the series’ highest since Season 3 in Spring 2014. Last season logged an additional 2.1 million streams on PBS digital platforms, including PBS.org and PBS apps. CALL THE MIDWIFE’s 2017 holiday special marked the annual event’s most-watched performance ever among total viewers (P2+) (Source: TV – Nielsen Live+7 U.S. program estimates.)

Made by Neal Street Productions for BBC One and PBS, CALL THE MIDWIFE has been one of Britain’s most popular drama series since it launched in 2012, and it continues to be one of the most-watched dramas in the U.K. CALL THE MIDWIFE? has earned more than 20 TV awards and nominations, including several from BAFTA, the Royal Television Society and the National TV awards. The series won a Gracie Award for Ensemble Cast in 2017 and has recently been voted the Best Drama of the 21st Century in the BFI & Radio Times Festival Audience Poll. CALL THE MIDWIFE was recommissioned by the BBC for a further three series and three holiday specials, taking the nuns and midwives right into the mid 1960s and CALL THE MIDWIFE to 9 series.

CALL THE MIDWIFE is created and written by Heidi Thomas, also the Executive Producer of Little Women on MASTERPIECE coming to PBS May 13, 2018; Executive Producers are Pippa Harris, Heidi Thomas and Ann Tricklebank. Executive Producer’s for the BBC are Elizabeth Kilgarriff and Christopher Aird. Episode one is directed by Syd Macartney (“Last Tango in Halifax,” “The Syndicate,” A Love Divided). The series is a Neal Street production for BBC/PBS and is distributed by BBC Worldwide North America.

Full episodes of CALL THE MIDWIFE (Season 7) will be available to stream the morning after broadcast on all station-branded PBS platforms, including PBS.org and PBS apps for iOS, Android, Roku, Apple TV, Amazon Fire TV and Chromecast. CALL THE MIDWIFE seasons 1-6 are now available on DVD and Blu-ray on shopPBS.org. Additional items, including Jennifer Worth’s memoirs, published by Penguin Books, The Life and Times of Call the Midwife, published by Harper Collins, and Doctor Turner’s Casebook, published by Simon & Schuster UK, are also available.

CALL THE MIDWIFE contains mature content that may not be suitable for all audiences. Viewer discretion is advised. Rated TV-14.”

What do you think? Have you seen Call the Midwife? Will you watch the new season?

One of my favorite shows! Love watching these ladies and guys battle all the
challenges that co,e their way. Never a dull moment.

A shame the networks can’t produce dramas like this instead of remaking old shows.