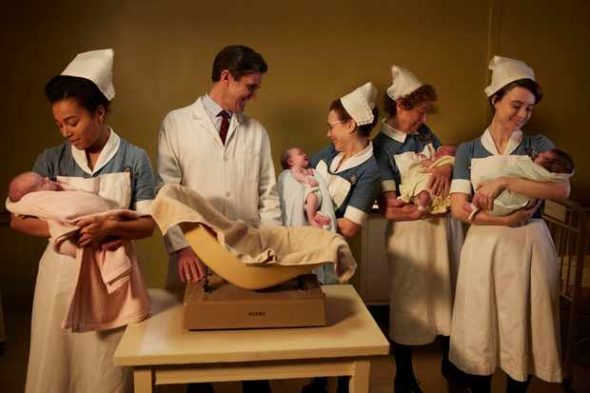 Great news for fans of Call the Midwife! BBC One just announced they’ve renewed the TV show for seasons 10 and 11.

BBC One has not only renewed Call the Midwife through 2022. The network has also ordered two more Christmas specials. You can read more info about the renewal below:

Two more series of multiple award-winning Call the Midwife have been commissioned for BBC One. With series nine about to start filming, the show will now be on air until 2022. Series 10 and 11, commissioned by Charlotte Moore, Director, BBC Content and Piers Wenger, Controller, BBC Drama Commissioning, will consist of two 8×60’ series and two Christmas specials.

Made by Neal Street Productions for BBC One, Call the Midwife has been one of Britain’s most popular drama series since it launched in 2012 and it continues to be the most watched drama series in the UK. Series eight has currently averaged nine million viewers per episode, making it BBC One’s biggest show of 2019 so far and the highest rating returning drama across all channels this year.

The critical and audience response to series eight has also been outstanding as the show explored many areas of medical and social history, including the impact of disability, teenage pregnancy, Intersex representation, Sickle cell disease, mixed-race marriages, adoption, cot death and abortion.

Pippa Harris, Executive Producer for Neal Street Productions, says: “We are delighted and humbled by the continued warmth of the audience response to Call the Midwife. It’s a testament to the extraordinary creativity of Heidi Thomas who pours her heart and soul into every episode. We are thrilled that the BBC have put such faith in the show by commissioning two more series and can’t wait to watch our wonderful cast and crew tackling all the social and medical changes which the swinging sixties will bring.”

Heidi Thomas, Creator, Writer and Executive Producer, says: “Even after all these years, it still feels as though Call the Midwife has more truth to tell, more tears to cry, more life to celebrate, and more love to give. We are blessed with the best cast, crew, and audience a show could wish for, and I could not be more excited about our future.”

Charlotte Moore, Director of BBC Content, says: “Everyone at the BBC is delighted we’re welcoming the nurses of Nonnatus House back for another two series and we’re all looking forward to following our cast through the tumultuous years of the late sixties. I’d like to thank the wonderful cast and crew, and particularly Heidi, Pippa and Ann for their continued creative ambition and dedication to such a very special show.”

What do you think? Are you a fan of Call the Midwife? Are you glad it’s coming back?

I am extremely excited for another two seasons. I was hooked within the first 10 minutes of my very first episode and haven’t been able to stop watching. I even rewatch seasons while I’m waiting for the new one to come out. The cast is phenomenal and so is the crew. Very Honored that they choose to share their talents with us the viewers

We love it. When will it start in Washington state?

Yes indeed. I am thrilled. I love watching new lives being brought into the world and seeing the adventures on the screen. Every situation is handled with love and dignity

Love love LOVE IT! It addresses so many issues in an appropriate but realistic way. I am a nurse and appreciate the truth of the series. My son also loves the show and has has learned so much (including a new respect for women and realities we face). Can’t wait to keep watching!!!!

Have watched for 8+ seasons. The quality and authenticity have been excellent until this season. Many midwife cast members have left and the plot revolves too much around the physician/medical model and less about midwifery, the lives of the midwives as they relate to the families they care for, and childbirth. Far fewer deliveries by midwives in recent episodes. Tonight’s episode was a superficial presentation of gestational diabetes and mental health focused on the physician who spoke in cliches. Please return to your formula for the first 8 seasons.

Love Call The Midwife. We are currently looking at season 9. This is one of the best written and well-acted series I have ever had the honor to view. I am an aspiring American actor. I just wish I was blessed to to perform in such a truly professionally series.

So WHEN is Call the Midwife going to air Season 10??? I’ve been a faithful follower this entire time from Season 1 and have NEVER missed an episode!! I’m so ready for it to air which should have started in March, 2021.

CALL THE MIDWIFE IS REFRESHING AMIDST ALL THE RUBBISH IN THE PRESENT SHOWS.

My family loves watching this show together. We are so excited that it will be back!