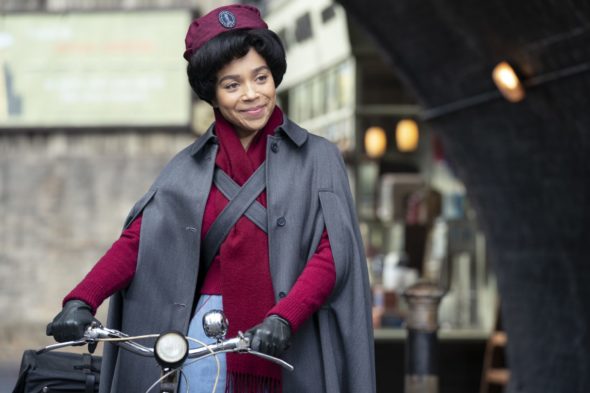 Call the Midwife has received another early renewal. BBC has renewed the long-running period drama series for seasons 12 and 13, keeping the show on the air until 2024. Season 10 debuts in the UK this Sunday night and season 11 will begin filming soon.

Two more series of multiple award-winning Call The Midwife have been commissioned for BBC One.

It’s an incredible privilege to be able to look back on a decade of Call The Midwife, and yet know that our journey is still very far from over. – Heidi Thomas

With series ten due to launch on Sunday 18 April at 8pm and series 11 about to commence filming, Call The Midwife will now be on air until 2024. Series 12 and 13, commissioned by Piers Wenger, Director of BBC Drama and Charlotte Moore, Chief Content Officer, will consist of two 8×60′ series and two Christmas specials.

Made by Neal Street Productions for BBC One and BBC iPlayer, Call The Midwife is celebrating its tenth anniversary series this year and continues to be one of Britain’s most popular and most watched drama series since it launched in 2012. The series attracts an enormous audience for BBC One, with its Christmas Specials achieving over 9 million viewers. Series nine was also the fourth biggest drama across all channels in 2020. The drama has won multiple awards across the decade for its depiction of challenging medical stories which are tackled by the nuns and midwives of Poplar.

Heidi Thomas, Creator, Writer and Executive Producer, says: “It’s an incredible privilege to be able to look back on a decade of Call The Midwife, and yet know that our journey is still very far from over. We are thrilled to be going on for a few more years! Like Nonnatus House itself, we have a proud past but an even more exciting future – full of old favourites, fresh faces, higher hemlines, new ideas. The stories we tell are like babies – they never stop coming, we love them all, and we vow to do our best by every single one.”

Pippa Harris, Executive Producer for Neal Street Productions, says: “We are all delighted by this vote of confidence from the BBC, and are looking forward to delivering more laughter, tears and babies for our loyal fans. Over the past ten years it has been an honour to see how warmly the show has been embraced by audiences around the world, thanks to the skilful writing of Heidi Thomas and the brilliant work of our cast and crew.”

Piers Wenger, Director of BBC Drama, says: “The enduring popularity of Call The Midwife is a testament to the extraordinary love and creativity from its creator Heidi Thomas and its producers Pippa Harris and Ann Tricklebank. We are delighted to have secured the future of Call The Midwife for two further series beyond those which are currently in production, and look forward to enjoying more adventures for the inhabitants of Nonnatus House for years to come.”

Call The Midwife returns this Sunday at 8pm on BBC One and BBC iPlayer.

What do you think? Do you watch the Call Your Midwife TV series on PBS? Are you glad to hear that it’s been renewed for two more years?

So happy! I love this show! Will there be a Christmas show?

Finally something worthwhile is returning after a long absence. Can’t wait to see the new series start!

Love Love Love this series. Hope I get to watch the new series when it comes out

Have watched from the beginning !!! I love this show!!

Yay nurse Crane is my absolute hero. I never wanted to be anyone but me but she is the perfect example of what want, and hope I strive, to be. What an admirable and amazing woman.

Yes, my husband and I watch Call the Midwife on PBS. We absolutely love this show!! The season always flies by so quickly!! Each hour of the program flies by!!! Can’t wait for the next season!!

Yes I do watch it on PBS and it is one of my FAVORITES !!!!
I cannot wait to see the new season and wish I knew when that would be…

My husband and I love Call the Midwife. We are so happy that it will be renewed for two more series.

I love Call the Midwife! I stumbled up on it several years ago and have been a watcher ever since. I remember hearing my Mother and Grandmother whispering, this was during the time when women who were pregnant were referred to as being “PG” or “With Child”, about having a baby during the time frame of this program. I’m so glad its been renewed. Great job goes out to everyone involved in making Call the Midwife such a success.