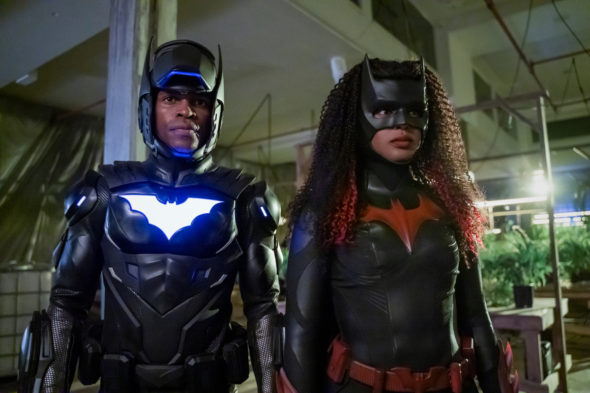 Will Ryan and the Bat Team have enough time to retrieve all of the artifacts? Has the Batwoman TV show been cancelled or renewed for a fourth season on The CW? The television vulture is watching all the latest cancellation and renewal news, so this page is the place to track the status of Batwoman, season four. Bookmark it, or subscribe for the latest updates. Remember, the television vulture is watching your shows. Are you?

Airing on The CW television network, the Batwoman TV show stars Javicia Leslie, Rachel Skarsten, Meagan Tandy, Nicole Kang, Camrus Johnson, Victoria Cartagena, Robin Givens, and Nick Creegan. The show is based on the DC Comics character and initially revolved around Kate Kane (Ruby Rose), a strong woman who never planned to be Gotham City’s new vigilante — Batwoman. Kate disappeared and Ryan Wilder (Leslie) discovered her Batsuit and picked up the mantle. In season three, Ryan works to protect Gotham’s underserved communities and she and the Bat Team focus on finding Batman’s scattered trophies — a collection of objects seized from Gotham’s most infamous villains — before they land in pernicious hands. Ryan also struggles with the bombshell dropped by Alice (Skarsten), that her birth mother is still alive.

The third season of Batwoman averaged a 0.09 rating in the 18-49 demographic and 458,000 viewers in the live+same day ratings (includes all DVR playback through 3:00 AM). Compared to season two, that’s down by 28% in the demo and down by 8% in viewership. While these numbers don’t include further delayed or streaming viewing, they are a very good indicator of how a show is performing, especially when compared to others on the same channel. There can be other economic factors involved in a show’s fate, but the higher-rated series are usually renewed and the lower-rated ones are cancelled. Find out how Batwoman stacks up against other CW TV shows.

Will The CW cancel or renew Batwoman for season four? While this show wasn’t a top-tier performer last season, it still outperformed a number of other CW shows. My sense is, at this point, that it may rise in the CW rankings now that it’s no longer airing on Sunday nights. For now, I think it will be renewed. I’ll update this page with breaking developments. Subscribe for free alerts on Batwoman cancellation or renewal news.

4/29/22 update: Batwoman has been cancelled by The CW so there won’t be a fourth season.

What do you think? Were you hoping that the Batwoman TV show would be renewed for a fourth season? Are you sorry that The CW cancelled this TV series, instead?

As I’m writing it, there are reports the show is cancelled, although the site is not yet updated with official announcement.
Guess new boss didn’t value diversity over dollars.

If the show is really an unknown they keep going back and forth and having no real answer. I would movie it. Put an batwoman movie out take like a year. Cancelled the show or do an renewal for final season. And when promote the movie in the last few episodes. If you think you have enough going for it to make an movie.

I do hope Batwoman will be renewed for a fourth season and if it gets cancelled after three seasons, I would be in shock.

Batwoman outdone itself. From those that remember season 3 episode ,5 they said the show was cancelled all but officially. Then episode 9 they like hold on an minute it not done like set in stone. Let’s talk about letting other network buy it. Or Making new seasons, just all options. And the out look of each one this is worth doing a play by play and seeing what happens. Anyway it does go it 2nd half give it a fighting chance way to go.

The finale I read had viewership back up to the pilot. And I caught up afterwards, so I think it’s worth updating the viewership numbers in this for now, and updating when it’s renewed, if it hasn’t already been

No but not the worst!

Just cancel it already Marcus is by far one of the most boring motor mouthed wanna be villains since Steppenwolf!

I think batwoman is the best tv show/action I seen on tv in a long time. Please watch it.

this…the writing still has some bad plotholes but the chemistry among the actors, interesting episodes so far and iproved fight scenes make it enjoyable