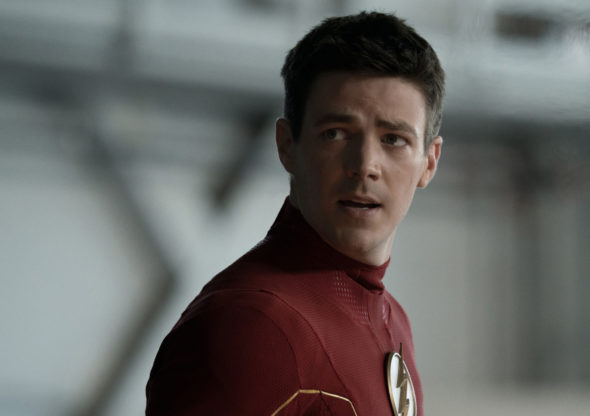 Is the scarlet speedster getting close to crossing the finish line? Has The Flash TV show been cancelled or renewed for a ninth season on The CW? The television vulture is watching all the latest cancellation and renewal news, so this page is the place to track the status of The Flash, season nine. Bookmark it, or subscribe for the latest updates. Remember, the television vulture is watching your shows. Are you?

Airing on The CW television network, The Flash stars Grant Gustin, Candice Patton, Danielle Panabaker, Danielle Nicolet, Kayla Compton, Brandon McKnight, and Jesse L. Martin. The action-adventure series centers on police scientist Barry Allen (Gustin) who develops super speed after a dark-matter lightning strike. Behind a mask, Barry uses his powers to protect the people of Central City from many an evil force as The Flash. Those on his team include Caitlin Snow/Frost (Panabaker), Meta-Empath Cecile Horton (Nicolet), the light-powered meta Allegra Garcia (Compton), brilliant tech-nerd Chester P. Runk (McKnight), and retired detective Joe West (Martin). Season eight picks up with Barry and his wife, Iris West-Allen (Patton), at the top of their game — both in their careers as superhero and reporter and as a devoted couple. But when the powerful alien Despero unleashes near annihilation on Central City, The Flash and his team must once again defy impossible odds to save the day. But their victory is short-lived as two new threats rise from the ashes of “Armageddon,” one of which will unleash unforeseen horrors into the lives of Barry and his teammates — and change Team Flash forever.

The eighth season of The Flash averaged a 0.13 rating in the 18-49 demographic and 604,000 viewers. Compared to season seven, that’s down by 38% in the demo and down by 26% in viewership in the live+same day ratings (including DVR playback through 3:00 AM). While these numbers don’t include further delayed or streaming viewing, they are a very good indicator of how a show is performing, especially when compared to others on the same channel. Though there can be other economic factors involved, the higher-rated shows usually get renewed and the lower-rated ones get cancelled. Find out how The Flash stacks up against other CW TV shows.

Will The CW cancel or renew The Flash for season nine? The show remains one of the network’s highest-rated shows but I suspect that we are getting close to the finish line. I wouldn’t be surprised if season eight or nine were the end. I’ll update this page with breaking developments. Subscribe for free alerts on The Flash cancellation or renewal news.

What do you think? Are you glad that The Flash TV show has been renewed for a ninth season? Are you disappointed that this CW series is ending?

I what the CW start doing crossover again like a flash legacy series could crossover with superman series and with Gotham knight. Plus if there a fourth shows that’s coming that’s all so new that coming as will.

Yes…it needs to Die! It is just a sucky, whiny Bore now!! Oh, boo hoo…I Can’t save the day! Let’s discuss our Feelings! There…Now I can save the day ..with Love!
Barf!

Guess what guys, The Flash 8.12 synopsis has been released!

WOW that would be so very AWESOME IF YOU decided to be the ones to say
“””” THE FLASH HAS BEEN CANCELLED YESSSSSSSSSSS “””” I myself thing it is the worst TV show THE CW has on the air right now so PLEASE let it go to be CANCELLED !!!!!!!!!!!!!!!