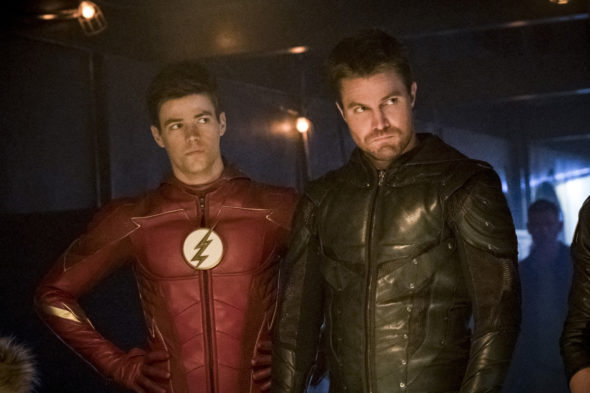 How many more superhero TV shows can The CW handle? According to CBR, the network won’t air more than four comic book series at a time.

Currently, The CW airs five DC series, including Arrow, The Flash, Supergirl, Legends of Tomorrow, and the newly premiered Black Lightning. But is five too much? Is there a limit to how many superhero shows one network can air?

It turns out there it. Recently, The CW boss Mark Pedowitz announced the network won’t air more than four superhero series at one time. No need to worry, though. This doesn’t mean any current series are being cancelled right away or there isn’t the possibility for more superhero series in the future.

What do you think? Do you watch a lot of superhero TV shows? Do you think there are too many?

Legends and supergirl are beyond terrible. Please kill them off.

cancel Arrow it used to be a excellent show its horrible now i stopped watching it in mid of season 5, i do enjoy Supergirl, Legends of tomorrow is great wish wentworth miller stayed for all seasons and flash is only okay its better than Arrow thouhh and Black Lightning is a great show

Flash and supergirl gonna be cancelled.

Supergirl is soooooooo bad that made me wanna write about it! I hate all that cheesy and girly stuff! I don’t care much about the awful acting but the lack of imagination and that terrible script are off the limits! I get that they can’t have Superman in every single episode but where is he now when an evil Kryptonian is around? Especially when supergirl failed and almost died… And how was she beaten by reign? I mean she just now got her powers… And how these powers aren’t affected by the blue sun on that solar system they went… Read more »

I still watch Arrow and Supergirl. Black Lightning doesn’t interest me although I heard it’s good so far. I stopped watching the Flash because it started to bore me and I never got into Legends either.

Just Arrow is the original , Others are for kids and better move to Disney channel.

Adult show not for kids superhero too violent shows getting old now,

There is no violet in Flash or Legends, These superpower shows are too much fantasy for little kids.

Cancel arrow and Black lightning need to end don’t like arrow use to. Black lighting last one trash shows.

Arrow, Flash, Legends of Tomorrow all great shows!! Great when the 3 shows get connected sometimes. Definitely not too many DC series. Great to see series where good always win over evil and people doing the right thing. Please don’t
cancel any of these.

You forgot to mention Supergirl.

Of course there isn’t to many. There superhero’s they inspire people their can never be too many. I love that there all connected like a big family. I love ARROW and flash, legends there all amazing. Keep this family alive and renew them all. There is never to many people making our lives better and doing the right things. If anything they need to go on longer so more people can see and learn to love the DC family as much as I do.

Flash is for small children so move to kids channels. Agree?

I love all the superhero shows on the CW. But in my opinion I think they need access to the 10:00 slot like the other channels so they can put more shows on.

No I love that CW has all the superheroes shows they are the greatest and we can see them all on one channel…keep them coming.