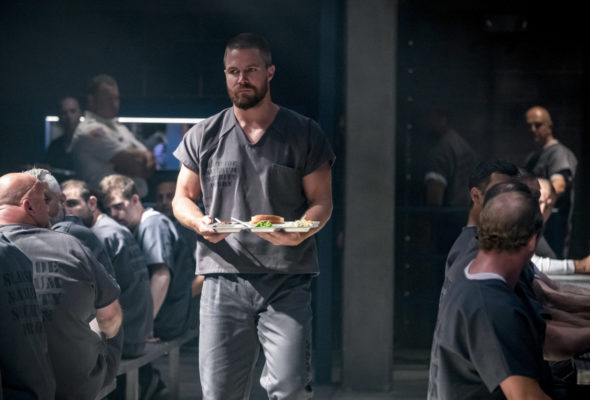 Is The CW still keen on Oliver Queen? Has the Arrow TV show been cancelled or renewed for an eighth season on The CW? The television vulture is watching all the latest cancellation and renewal news, so this page is the place to track the status of Arrow, season eight. Bookmark it, or subscribe for the latest updates. Remember, the television vulture is watching your shows. Are you?

The seventh season of Arrow averaged a 0.34 rating in the 18-49 demographic and 1.09 million viewers. Compared to season six, that’s down by 21% in the demo and down by 14% in viewership. Learn how Arrow stacks up against the other CW TV shows.

Will The CW cancel or renew Arrow for season eight? The ratings are down once again but it’s the cornerstone of the network’s DC programming franchise. I don’t see it getting cancelled this year and would expect it to get a newsworthy “final season renewal” (whatever season that may be), rather than just peter out. I’ll keep an eye on the Nielsens and update this page as news develops. Subscribe for free updates on any Arrow cancellation or renewal news.

What do you think? Are you glad that the Arrow TV show has been renewed for an eighth and final season? How would you feel if The CW had cancelled this TV series, instead?

I feel that Arrow deserves the opportunity to end on an established timeline instead of just axed; however, hopefully this will be done using the season wisely. Smallville was given two seasons to wrap up and at the same time introduce Clark’s transformation to Superman which was denied by the original producers of the show. Unfortunately this was clumsily done. The perfect example was giving ONE episode to get others in the series to accept Clark with the eyeglasses to disguise him in Metropolis. One episode? Details like this should have been introduced gradually and cleverly, much like Clark’s powers… Read more »

Finally!!! What a sht show that never respect the source material!!! It should end long time ago~~~!!!

Will i think they should cancel Arrow because i rather there be a superman series or some other type of show and series..

I’ve watched every episode many times. I’m a little disappointed this season, but we’re only half way. Need more action. It’s gotten a little toned down. Sorry to see Curtis go. If Arrow was to end they need season 8 to tie up lose ends. Maybe if Batwoman starts this year it will give everything a boost.

I was praying for season 8. Glad they renewed it once again. Best cape show ever.

Arrow needs come back with a season 8 it will need to show more of happened to his city that makes it so bad in the future that was showed in the flashbacks .

Arrow needs a season 8 because the show it is so amazing !

Please end it need to end time up.