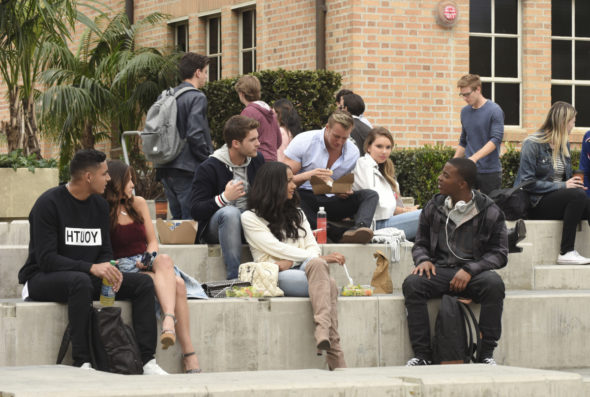 Will Spencer James remain at Beverly High? Has the All American TV show been cancelled or renewed for a second season on The CW? The television vulture is watching all the latest cancellation and renewal news, so this page is the place to track the status of All American, season two. Bookmark it, or subscribe for the latest updates. Remember, the television vulture is watching your shows. Are you?

The first season of All American averaged a 0.22 rating in the 18-49 demographic and 675,000 viewers. Learn how All American stacks up against the other CW TV shows.

Will The CW cancel or renew All American for season two? The numbers haven’t been very good and this series isn’t based on a pre-existing property so I’m thinking we’ll see a cancellation. I’ll update this page with breaking developments. Subscribe for free All American cancellation or renewal alerts.

4/24/19 status update: The CW has renewed the All American show for a second season.

What do you think? Are you glad that the All American TV show has been renewed for a second season? How would you feel if The CW had cancelled this TV series, instead?

It doesn’t seem to be available on the Bell network anymore. Where is season 2 on CW ?

The Best Show on TV, its has ups and downs twists and turns. I honestly cried on serval different scenes and could relate to some its tells the story of Both worlds Rich vs. Proverty, Beverly Hills vs. The Hood. Let alone the struggle of a black man trying to make something positive of his life and the impact it took on others… pls PLS PLS MAKE A SEASON 2…..

Love love love this Show they would be crazy to axe it. Its full of surprises and real life issues. Keep ot going please

All American is a must watch series. It’s a great series that should be renewed

Such an amazing show! I watched the entire first season in one day. Please let there be a second season.

I love All American and All Od The Cast Members… My daughter told me this was a great show and that I needed to watch it.. I said okay because I saw Tate Diggs was in it and I loved him.. So it was a Thursday when I got off from work and started watching All American on Netflix my daughter went outside with her friends after watching the 1st episode I had to call her up and fuss at her cause now I’m glued to the TV.. I cancelled all my plans for that weekend I was mad when… Read more »

what an amazing show, I was stuck from the very first episode. can not wait until the new season of All American returns!