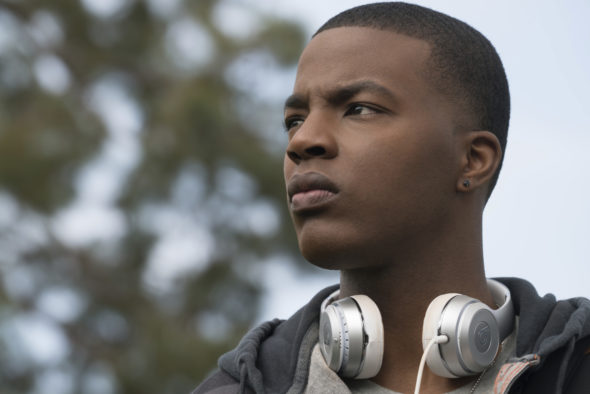 Has All American been cancelled? Recently, The CW boss Mark Pedowitz discussed the future of the TV show, Deadline reports.

During this year’s winter TCA press conference, Pedowitz said All American has not been cancelled even though it wasn’t included in The CW’s recent slate of renewals. Instead, Pedowitz says the network will decided the show’s future in spring:

We are extremely proud of that show. We think the production quality is up there with Jane the Virgin and Crazy Ex Girlfriend. It has nothing do with the show. W’re going to sit down in May and determine the wants and the needs are about that moment. It’s positive. It’s a show I’m proud to support.”

So far, All American hasn’t fared so well in the ratings. Eleven episodes in, the series is averaging a .24 rating in the 18-49 demo and 705,000 viewers. However, while the numbers aren’t great, The CW does frequently renew series with low ratings.

What do you think? Are you watching All American? Would you watch a second season?

PLEASE DO NOT CANCEL THIS SHOW!!! It’s great to see a show with relevant issues and positive characters for young people today! I just love this show and my family now watches as well!

I just finished Season 1, and am so in love with this show!! Please do not cancel it!! It is an awesome show with so much more to tell!! I am sorry I was late to it!! Would love to see many more seasons!!

DO NOT CANCEL. Please add a second season. This is a great show. This show has so much more to tell. So much that can be developed in the storyline.

I would very much like to see season two [and beyond] of All-American. I didn’t know
it existed til I discovered it on Netflix this week. A very compelling show.

PLEASE DO NOT CANCEL THIS SHOW!! I love this show it is so positive. I watch this show with my son who is 13 years old. His friends suggested the show and I watched all episodes in one day on Netflex! Keep. I love the episodes how it handles all type of issues and relationships but most of all it tackles racial issues as fair, transparent, organic and authentic. It is a must keep!! I love all the Actors!!

I love love love All American. I got my family watching also.

OMG! This show is awesome. We found it on Netflix and just found out it comes on the CW. Do NOT cancel this show!!! It is the single thing everybody in our house can agree on. The characters are well-developed and the story is original. THIS is a keeper!!!

The show is good. Don’t cancel

This show is so good. I’m shocked to hear it’s possible it wont be renewed. I love the cast the story everything. Please don’t cancel give it a second season trust me this is a hit show.

LOVE this show, one of the best this season!!!

To cancel this show would show an outlook that is very shallow and superficial. Out of all the Networks, CW has given us an entertainment vehicle that is closer to reality than any other being viewed on non-premium focused television. Don’t cancel, keep it flowing. Thank you.

I LOVE that show. PLEASE renew it. I’m not sure why people aren’t watching, it’s AWESOME!!!!

We love All-American. !! We will be so upset if we are left hanging if this great show is cancelled!