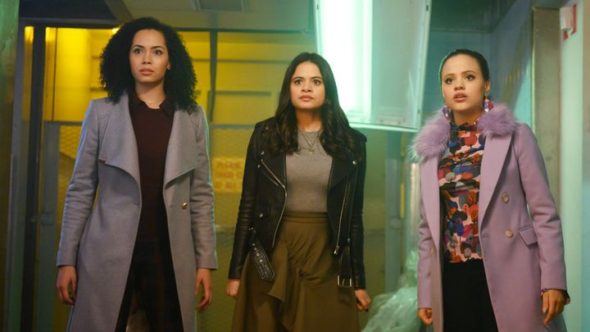 The series about “The Power of Three” has landed a second season. The CW has announced that the Charmed reboot series will return for season two during the 2019-20 broadcast season.

The first season of Charmed is currently averaging a 0.33 rating in the 18-49 demographic and 1.03 million viewers. Those are middle-of-the-road ratings for a CW series. Given that the smallest network depends less on traditional ratings than the other nets, it’s not a surprise that this reboot was renewed.

Today, The CW also announced that nine other TV shows had been renewed for the 2019-20 season: Arrow, Black Lightning, DC’s Legends of Tomorrow, Dynasty, The Flash, Legacies, Riverdale, Supergirl, and Supernatural. The fates of All American and Roswell, New Mexico have yet to be announced.

What do you think? Do you enjoy the Charmed TV show on The CW? Are you glad that it’s been renewed for a second season?

There’s nothing that can replace the original Charmed and the original characters. I too would have loved to see a spin-off to include the children of the Charmed Ones. I have been watching the show since the 90’s. I have an open mind and I do enjoy the current version. Can the characters of the 90’s somehow be incorporated into the original series?

Love the show HATE THE CAST

I think that it would have been AMAZING to see if they had done the new one with the CHILDREN of the old CHARM gang. Even if those actors and actresses weren’t willing to come back and revamp their characters finding people who resembled them might have worked. I also am a true fan of the original and even my daughter who just turned 13 has watched the original Charmed with me. Prue is her favorite and she was so mad when they killed her off.

I love the reboot. I enjoyed watching the original, but I actually enjoy the reboot more. So happy to see it was renewed.

I love the new series of Charmed. I was sad when the original Charmed was done, so this is like a special show for me. It brings back good memories.