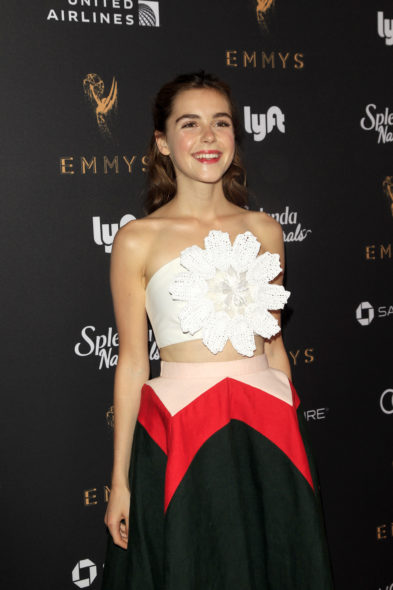 The Riverdale TV show has done pretty well on The CW, so why is the untitled Sabrina spin-off going to Netflix, instead? Is there witchcraft afoot? Have the Charmed Ones invoked the Power of Three? Find out what CW President Mark Pedowitz had to say, when he addressed the situation during this weekend’s Winter TCA Press Tour.

Featuring the Archie Comics character, Sabrina the Teenage Witch, the new TV show is based on the graphic novel The Chilling Adventures of Sabrina. Last week, Netflix announced Mad Men and Feud star Kiernan Shipka has been cast as the series lead. Writer Roberto Aguirre-Sacasa is executive producing with director Lee Toland Krieger, as well as Greg Berlanti and Sarah Schechter of Berlanti Productions, and Archie Comics’ Jon Goldwater.

The untitled Sabrina series was originally in development at The CW (where a Charmed reboot is underway) but Netflix ended up ordering two 10-episode seasons (for a total of 20), instead. Deadline reports:

[Pedowitz] addressed the upcoming Sabrina the Teenage Witch series. Originally set up in development at the CW as a companion to Riverdale, also based on characters from Archie Comics, the project was pulled from the broadcast network when it landed a 20-episode, two-season, straight-to-series order at Netflix early last month following a strong performance by Riverdale on the streaming platform. That in turn, has helped Riverdale‘s ratings on the CW climb in Season 2.

“I was aware, I was deeply involved with (WBTV president) Peter (Roth) on the whole thing,” Pedowitz said. “It was a decision which I understood from a business point of view. Netflix offered them a two-year deal, we weren’t going to do that. Netflix has had great success and should get some credit for helping us get Riverdale binged, and our guys get a lot of credit from bringing the guys who binged (on Netflix) back to the network and our digital site. I wish them the best.”

The CW has had another series about female witches, a Charmed reboot, in the works with Jane the Virgin creator Jennie Snyder Urman. Did that play a role in the CW letting Sabrina go?

The answer is no. “The real similarities between the two shows is witches. They were very different concepts in how they will be handled — one has Roberto Aguirre-Sacasa’s patina to it, one has Jenny Urman’s — very different storytellers, very different versions of what the show should be.”

What do you think? Do you plan to check out the new Sabrina TV series when it debuts on Netflix? Should they just call it The Chilling Adventures of Sabrina? What title would you give this new TV show?

I was really hoping for the show to be in the CW, because I was actually looking forward to cross overs. Oh well.

How is a twenty-episode order from Netflix over two years better than a 22-episode order from the CW over one a better deal? Who makes out better with that? Certainly not anyone involved with the creative end (unless they like a half-year vacation without pay), and certainly not Warner Bros. Typical executive spin, but not based in any real-life logic.