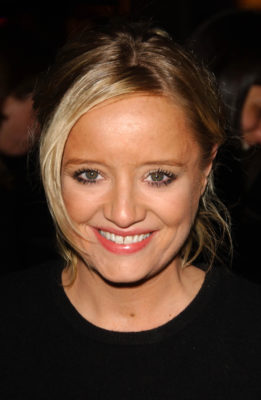 Who’s joining The Chilling Adventures of Sabrina? TVGuide reports Lucy Davis has been cast in the upcoming Netflix TV show.

On The Chilling Adventures of Sabrina, Davis will play Aunt Hilda, one of Sabrina’s aunts who is “as nurturing with a great sense of humor but can also have a mean streak. A powerful witch in her own right, she’s just as good at brewing spite jars as she is at dishing out love potions for the hormonal teens at Baxter High.”

Davis joins fellow cast members Kiernan Shipka and Jaz Sinclair. Netflix has not yet announced a premiere date for the series.

What do you think? Are you a Sabrina fan? Will you watch the new Netflix series?

No, will not watch this show if they make it dark… Sabrina the teenage witch was a children’s show basically… The ruined the Archie comics by making it about murder, sex and drugs in Riverdale. Instead of making it a light and wonderful as the comic books and cartoons were. Archie, Bettye, Veronica, Jughead, Richie, they were created for the please of children. No way I would let my children even attempt to watch the vulgar show that is suppose to be based on their comics. It should have been made to simulate the Archie mysteries, somewhere on the line… Read more »