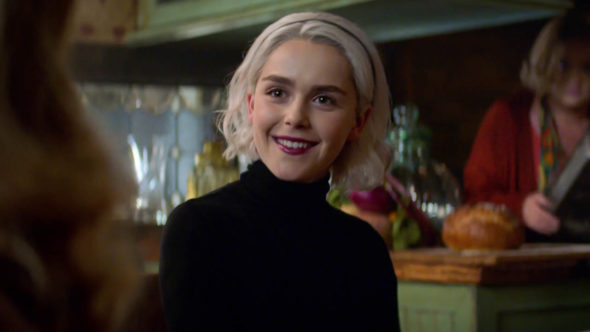 Horrific news for fans of Chilling Adventures of Sabrina. Netflix just announced the final group of eight episodes (aka Part Four) of the TV show will premiere later this year. There won’t be a third season (Parts Five and Six).

Like many other streaming services, Netflix does not release ratings for their TV shows, but it seems Chilling Adventures of Sabrina didn’t make the cut for Netflix. The series’ final episodes are set to debut later this year.

“Working on The Chilling Adventures of Sabrina has been an incredible honor from Day One,” said showrunner Roberto Aguirre-Sacasa. “I’m also grateful to our partners … for letting us tell the story we wanted to tell, the way we wanted to tell it." https://t.co/JEb8zF7bFa

What do you think? Are you a fan of Chilling Adventures of Sabrina? Are you sad that there won’t be a third season?

I was so disappointed with how the show ended.

Sad to see it this show go because it started out SO WELL. Not surprised it was cancelled as I saw it declined after season 2.
Horrible. horrible ending, last episode in season 4.

I’m so sad chilling adventures of sabrina is not making season 5. Every season has been so good and worth the time to watch.

WHY do they keep ******** things up on that platform?! They seem to have a ‘3 season rule’ with most series (IF they even make it that far). I loved “The Santa Clarita Diet” and they dropped that. Now they’re dropping Sabrina (which I also loved). Part of me can’t help but wonder if at least part of it had to do with all the pro-Satanism that was bandied about in the show (which I had to cringe at, but I realize it’s still fiction). This truly sucks and has happened to a list I once had of about 10… Read more »

What the hell is Netflix thinking? This is a great show! Its different, it’s entertaining and a great escape and fun mashup of a horror show with clever characters and dialogue. Dumb move Netflix!

Netflix please don’t be like all the other TV channels that drop a beloved show because someone said it’s not bringing in enough $$ , you need to start advertising your shows. I found 3 people that had never heard of your version of Sabrina and they loved it!! Its a great show….I give it a 9

Netflix Sucks they do this crap all the time 2 or 3 so called seasons and then its gone..i will be cancelling Netflix after the last episodes..Screw Them!

Really sorry to see that it was cancelled. I enjoyed Sabrina immensely, wasn’t for kids like the other one. I think they should let people vote. Netflix is another one that cancel good shows. Very disappointed.

I am extremely sad this show is ending, this show was the last reason i have Netflix so once it ends that is the end of my 8 year subscription. They keep canceling everything i like and only adding stupid stuff i have no desire to watch. This show was the best part of netflix and i am truly sorry to see it go.

This show was better than I initially expected it to be.

I think that 4 seasons is good enough and am pleased to have advanced notice of the final season that enables them to wrap things up properly.

I’m happy when they give advanced notice since it gives a show a chance to wrap things up. There are still those that don’t though (I am looking at you Santa Clarita)

Very sad,,Sabrina was one of the best Shows in netflix and its getting on my nerves, that netflix cancelled everything after season 3 or 4 ….. Netflix has a lot of crap, and few good Shows and Lost one of the better ones