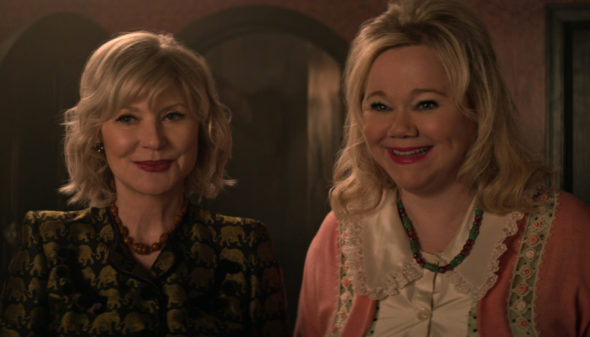 The Chilling Adventures of Sabrina will have two special guests for an episode that airs during the Netflix series’ fourth and final part (each of the show’s two seasons has been broken into two parts). Caroline Rhea and Beth Broderick are appearing on the series as the aunts of Sabrina (Kiernan Shipka) from an alternate universe where her life is a sitcom. Rhea and Broderick starred on the ABC and WB sitcom, Sabrina the Teenage Witch, as the aunts of that show’s Sabrina Spellman (played by Melissa Joan Hart).

The Wrap revealed more about the fourth part of the Netflix series:

“Chilling Adventures of Sabrina re-imagines the origin and adventures of Sabrina the Teenage Witch as a dark coming-of-age story that traffics in horror, the occult and, of course, witchcraft. Over the course of Part 4’s eight episodes, The Eldritch Terrors will descend upon Greendale. The coven must fight each terrifying threat one-by-one (The Weird, The Returned, The Darkness to name a few), all leading up to…The Void, which is the End of All Things. As the witches wage war, with the help of The Fright Club, Nick begins to slowly earn his way back into Sabrina’s heart, but will it be too late?”

Check out a teaser for the final episodes of Chilling Adventures of Sabrina featuring Rhea and Broderick below.

What do you think? Are you planning to watch the final episodes of Chilling Adventures of Sabrina? Did you watch Sabrina the Teenage Witch on ABC?

I love this show please continue

Oh yes I will be watching

I wanted to like this show, but all the Hail Satan stuff was just not right. I couldn’t in good consciousness continue to watch the show, not after Sabrina signed Satan’s Book.