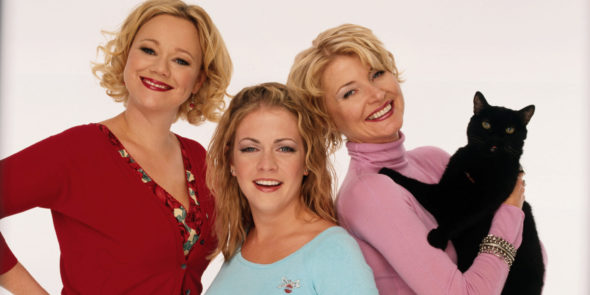 With a new Sabrina the Teenage Witch is on the way, the original series is back in the news. Entertainment Weekly reports the cast of the ABC/WB TV show recently reunited.

Based on the Archie Comics characters, the sitcom starred Melissa Joan Hart as Sabrina, a teenage witch who lives with her two aunts and their talking cat, Salem. The cast also included Carolina Rhea, Beth Broderick, Nate Richert, and Jenna Leigh Green. The show ran for seven seasons before ending in 2003.

At the recent LA Comic Con, the cast of Sabrina the Teenage Witch sat down to discuss where they think their characters would be today. Rhea admitted she imagines Aunt Hilda lives alone with Salem somewhere:

I think it’s so sad, I think I probably live with Salem [the cat] alone somewhere and pine for Drell. Some pathetic thing.”

And what about Sabrina? Did her and Harvey stay together? Richert said:

Well, Sabrina and Harvey would probably be having a 16-year-old at this point, so because of the rules I think I’d be banished somewhere. We probably figured it out,” Hart assured him, “and probably started our own, like, Hogwarts. Started our own little witch school, maybe foster some children that are part mortal, part witch, and [teach them] how to navigate that world.”

Additionally, Hart revealed that the cast has no involvement with The CW’s upcoming Sabrina series, which will be a darker take on the Archie Comics character:

We’re not involved… The rights reverted back to [Archie Comics], and they’re doing The Chilling Adventures of Sabrina, which is a darker sort of twist. I think our show was about magic and family, and I think the new one — it sounds like, I have no idea — but the new one is going to be more about witchcraft, dark stuff. I think it sounds more Buffy the Vampire Slayer than it does Sabrina, so I think it will appeal to a different kind of audience and be a totally different show.”

Check out video of the reunion below:

What do you think? Are you a fan of Sabrina the Teenage Witch? Will you watch The CW’s upcoming reboot?