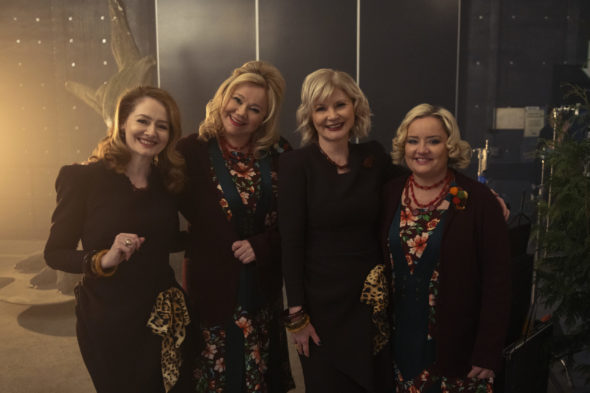 Chilling Adventures of Sabrina has now wrapped its run on Netflix, but before the series ended, viewers were treated to an homage to the ABC sitcom Sabrina the Teenage Witch. Sabrina’s aunts from that series, played by Beth Broderick and Caroline Rhea, appear in the penultimate episode of the Netflix series.

The episode features Sabrina (Keiran Shipka) venturing into the ‘Other Cosmos’ and landing in the sitcom world with the aunts from the ABC series. Shipka said the following about the crossover between the two Sabrina shows, per The Wrap:

“I feel like we could not wrap it up without paying homage to Sabrina the Teenage Witch. And we had been wanting to feature the aunts or do sort of a sitcom-esque episode for quite some time — actually, since Season 1. And it didn’t quite pan out then, and I’m really glad that it didn’t, because it felt so earned and so fun to do during this last season. And then it was getting around set, everyone was talking about it. There was like a little rumor going on throughout the set whether they were going to do it or not. And once they came on, Oh my God, everyone was overjoyed. It was so fun. One of my favorite episodes to ever shoot. They were so wonderful and it just felt so right.”

Lucy Davis, the actress behind Hilda on Chilling Adventures of Sabrina, also spoke about the special event on the Netflix series. She said the following, per The Los Angeles Times:

“People who like both the shows will enjoy seeing that come together. I was trying to keep it cool, so that I didn’t sound like a buffoon, but I was really excited to do this.”

What do you think? Did you watch the end of the Chilling Adventures of Sabrina on Netflix? Did you enjoy the Sabrina the Teenage Witch crossover?

I Binged the last episodes! AND I cried at the end!!!! So freakin SAD!!! Awesome cinematography and the acting was out of this world on this one folks!!! Standing Ovation !!