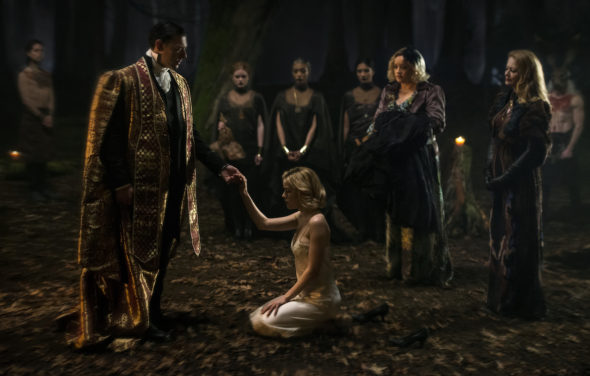 TV show description:
An occult horror drama from creator and writer Roberto Aguirre-Sacasa (who is also showrunner of Riverdale), the Chilling Adventures of Sabrina TV show is inspired by Archie Comics’ Sabrina the Teenage Witch. Originally developed as a Riverdale spin-off for The CW, Chilling Adventures of Sabrina is a dark twist on the magical coming-of-age story.

The updated, supernatural series centers on Sabrina Spellman (Shipka), a sophomore at Baxter High in Greendale (a town near Riverdale), who is half-mortal and half-witch. Sabrina lives with her aunts Hilda (Davis) and Zelda (Otto), as well as her cousin, Ambrose Spellman (Perdomo), and her familiar, Salem the cat.

A pan-sexual warlock, cousin Ambrose hails from England. The Witches Council has put him under house arrest. Consequently, he is forbidden from leaving the funeral home where the Spellmans live. Mischievous and snarky, Ambrose is often one of Sabrina’s partners in crime.

Warm and nurturing, Hilda is the more maternal of Sabrina’s aunts, but that doesn’t mean she’s without a devilish nature. Hilda is as likely to develop “spite jars” to thwart the family’s foes, as she is to cook up a love potion for Sabrina’s schoolmates.

Zelda, meanwhile, is made of sterner stuff. A devout witch and member of the Church of Night, she wears her pride for her people on her sleeve and is passionately protective of Sabrina.

As High Priest of the Church of the Night, and Dean of the Academy of the Unseen Arts, Father Blackwood (Coyle) is an ambitious, unyielding sort. He has a secret plan that will pit him against Sabrina and other members of the coven.

Father Blackwood isn’t Sabrina’s only complication at the academy. The Weird Sisters, Agatha (Rudolph), Prudence (Gabrielle), and Dorcas (Cowen) are a trio of clever, powerful witches who sneer at Sabrina for her mixed bloodline.

The forecast for Sabrina’s time at the academy is not completely dreary though, thanks to the young, hunky warlock Nicholas Scratch (Leatherwood), who is a student of her father’s teachings. He finds himself drawn to Sabrina, and the sparks fly between them.

Whether Nicholas will prove a foil for Harvey Kinkle (Lynch) remains to be seen. A mortal and the son of a coal miner, this dreamy darling is Sabrina’s boyfriend and has no clue of the dark forces conspiring to keep them apart.

Also found in the halls of Baxter High is Mary Wardwell (Gomez), Sabrina’s mentor and favorite teacher. The only trouble is, sometimes Mary is possessed by Madam Satan, the Devil’s Handmaiden. When she is, she turns into a calculating, temptress, who aims to lure Sabrina onto the Path of Night.

Sabrina’s circle also includes Rosalind Walker (Sinclair), a brave, outspoken young woman who is Sabrina’s best friend, and the daughter of Greendale’s minister. Sabrina is also often found with Susie Putnam (Watson), who is a founding member of Baxter High’s new WICCA club. Susie knows what it is like to be bullied and also has to deal with a supernatural threat at home.

The series kicks off as the Church of the Night is trying to claim Sabrina as their own. On the eve of her 16th birthday, they want her to sign the Book of the Beast and commit herself to the Dark Lord. Sabrina, however, has her own plans. She resolves to make her own way in the world while protecting her family, friends, and Greendale from the forces of evil.

Series Finale:
Episode #36 — Chapter Thirty-Six: At the Mountains of Madness
The darkest days of the void arrive as Sabrina struggles with grief and regret. Can she summon the strength to overcome an endless cycle of destruction?
First aired: December 31, 2020.

What do you think? Do you like the Chilling Adventures of Sabrina TV series? Should this Netflix TV show have been cancelled or renewed for a third season (parts five and six)?

Not surprised that it was cancelled. It started off GREAT!……but then it declined in the quality of story line season by season. Pity. It had such potential. It needed better writers. I really liked it.

There are so many shows that are axed before their time. Netflix’s Sabrina is one of those shows. Too many people take things to seriously. Relax people, just like Harry Potter wasn’t the works of evil, neither is Sabrina. It’s a fun show I really think needs more time on the screen.

Yes please renew. I love it and can’t wait for it’s continuation

Love this show so much. Keep going with the seasons please!!!!