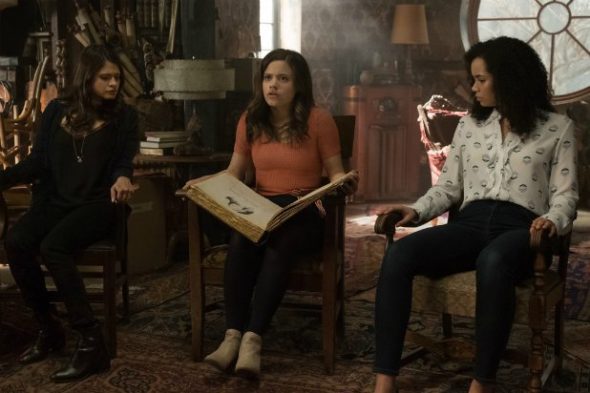 The Power of Three is returning to television this fall in a new version of Charmed. The original series ran from 1998 until 2006 on The WB network. As in the original, this new series follows three sisters who discover that they are powerful witches with supernatural abilities.

The new version of Charmed will air this fall on Sundays at 9:00 PM, following season four of Supergirl. For those who haven’t heard, for the first time in 10 years, the smallest network will be programming for two hours on Sunday nights (check out the whole Fall 2018 schedule here).

The CW has released an official description of the Charmed series, as well as a pair of “first look” videos.

“Stronger together.” That’s what Marisol tells her daughters, firebrand social justice warrior Melanie “Mel” Vera, and her sister, fun-loving Maggie, about their family. Mel is a graduate student in the women’s studies department her mother heads at Hilltowne University; Maggie is a freshman considering rushing a sorority (to Mel’s amused dismay) and going “on” again with her on-again off-again boyfriend Brian.

But then, a shocking tragedy shatters their world and threatens their sibling bond: Marisol dies in a horrifying accident. Or was it? Three months later, we find Mel unable to accept the official explanation of their mother’s death, while Maggie accuses her of being morbidly obsessed. And then, another huge shock shows up at their front door: they have an older sister, brilliant geneticist Macy, whom their mother kept a secret all these years! Macy is new in town and doesn’t know a soul (except for Galvin, the cute fellow scientist who’s been showing her around). Macy is eager to connect with Mel and Maggie, but Mel can’t handle another shock, and shuts her out.

With the emotions of all three sisters running high, each of the girls suddenly exhibit impossible new abilities: Mel can freeze time, Maggie starts hearing others’ thoughts, and Macy has telekinetic powers. But don’t worry, there’s a perfectly reasonable explanation… or so says Harry Greenwood (who as far as they know is the officious new chair of the women’s studies department), when he gathers the three sisters together to reveal they’re actually powerful witches, as was their mother.

And he’s not really a professor, he’s their “Whitelighter,” a witch’s advisor and guide! Not only that, but Mel was right: their mother’s death was no accident – she was murdered by unknown dark forces. It’s a lot to take in, but ultimately the sisters accept their new destiny as The Charmed Ones… and their new duty to protect humankind from the demons that walk among us… one of whom killed their mother. With the Power of Three, they are stronger together… even if they have no idea what they’re really up against.

I’m surprise you didn’t even involve the original cast. At least as Grandparents of the next generation and move forward this is just a remake. I’ll watch the first episode but I still watch the reruns of the original series not interested in a remake.

I agree this is going to fail. If they wanted to bring the show back they should have did it with Piper, Phoebe & Pages kids taking over as the charmed ones.

How can this even be called Charmed? I was looking to see Piper, Phoebe & Page as parents guiding them or the 1 st episode at least having the originals children having to rescue the elders this is how they learned they had magical abilities… Not interested in this new remake

This is bound to fail, fans of the original series aren’t going to settle for a second best (and that’s being optimistic) cast trying to copy very successful characters.

I think they should have changed the name and it def won’t be as good as the original, but hopefully it’s good!

dumb. come up with something original !!!