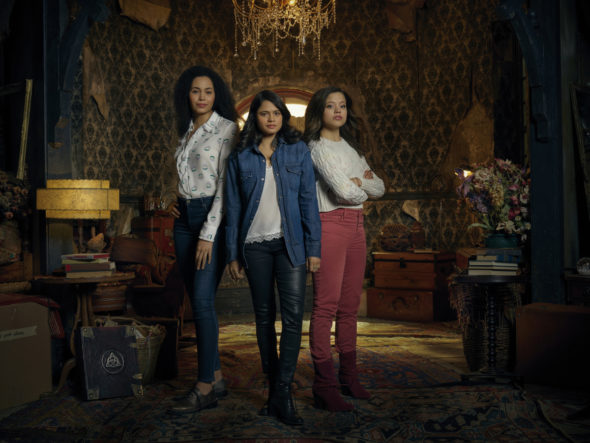 TV show description:
Based on The WB’s series which ran from 1998 to 2006, the Charmed TV show is a supernatural fantasy drama centering on the Vera sisters –Melanie (Diaz) and Maggie (Jeffery) — whose mother, Marisol (Cruz), dies in what at first appears to be a tragic accident. Three months after losing their mom, Mel and Maggie discover they have an older sister, Macy (Mantock), whose existence their mother had kept a secret.

Following in her mother’s footsteps, Mel is a woman’s studies grad student at Hilltowne University. On the other hand, Maggie is a freshman who is considering joining a sorority and has an off-and-on relationship with Brian (Gillespie). Meanwhile, Macy is an accomplished geneticist.

Macy wants to connect with her sisters, but Mel, who has been unable to accept the official explanation of Marisol’s death, just can deal with this surprise and shuts her out. With their emotions heightened, all three sisters start exhibiting new abilities.

While Mel realizes she can freeze time, Maggie can read people’s thoughts, and Macy starts exhibiting telekinesis. Harry Greenwood (Evans), who they thought was taking over Marisol’s department at Hilltowne, tells the sisters that there is a good explanation for their new powers. In actuality though, Harry is a “Whitelighter,” ie a witch’s guide.

When the women learn their mother’s death was not an accident, Mel feels somewhat vindicated. It turns out that Marisol was murdered by mysterious dark forces. Now, these young women have to accept their destiny as “The Charmed Ones” and devote themselves to protecting humanity from the demons that prowl the earth.

As they learn to harness the “Power of Three,” the sisters realize they are stronger together — even though they’re up against the unknown evil which killed their mom.

Series Finale:
Episode #72 — The End is Never the End
Mel (Melonie Diaz), Maggie (Sarah Jeffery) and Kaela (Lucy Barrett), along with Harry (Rupert Evans) and Jordan (Jordan Donica), have now discovered that the cabal of foes coalescing to bring down the Power of Three are actually working for an ancient evil that’s been laying dormant since the dawn of magic. This powerful dark force — known as the Lost One — will be the ultimate test of the strength of the newly discovered sisterhood; forcing them to rekindle their connection…or face the destruction of magic itself.
First aired: June 10, 2022.

What do you think? Do you like the Charmed TV series? Should this TV show have been cancelled or renewed for a fifth season on The CW?

Just when it was getting interesting and it gets cancelled?? Why? Please bring back charmed season 5.

I think term should have been renewed my God they just got a new sister you guys didn’t even give it a chance if you remember in the original charmed after Shannon Doherty got asked and Rose McGowan came on it brought new life into the show that’s what this new suster would have done too. Now or never know it looks like the CW likes to spend a lot of money on special effects but when push comes to shove I don’t think the network can handle all that money that’s spent but yet they keep those like Kung… Read more »