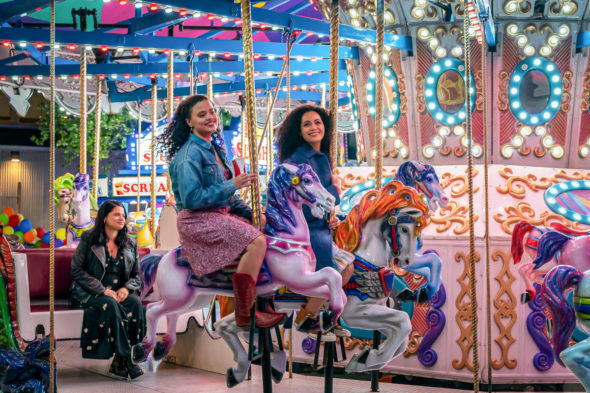 Charmed is losing one of its stars ahead of season four. The season three finale is set to air on Friday night, and one of the sisters is at death’s door. Madeleine Mantock is leaving the series and Friday’s episode will be her last appearance. Melonie Diaz, Sarah Jeffery, Rupert Evans, Poppy Drayton, and Jordan Donica will continue to star in the series.

Mantock said the following about her exit from The CW, per Variety:

“Playing Macy on ‘Charmed’ for the last three seasons has been an immense privilege and I have so enjoyed working with our fantastic producers, creatives, cast and crew. I’m incredibly grateful to The CW and CBS Studios for my time on the show and for being a brilliant support in my difficult decision to leave. Huge thanks to our fans who can look forward to, what I know will be, a spectacular fourth season.”

Liz Kruger and Craig Shapiro, the executive producers for Charmed, also spoke about the actress’ exit:

“We can’t thank Madeleine enough for her incredible and inspiring work on Charmed. We will miss her as much as the fans will, but we also respect her decision to move on. This is a difficult time in the world, and everyone has to follow their heart. We wish her well, and the door is always open for a return visit from Macy…one way or another!”

The series will return at some point during the 2021-22 season. A premiere date for season four will be announced at a later time.

What do you think? Are you surprised by Mantock’s exit from Charmed? Do you plan to watch season four without her?

There is one thing that seems unlogical of Macy leaving the show. In original series they couldn’t go back in time in order to change the future, because there were no power of 3 and noone that can help. But hey – what about the elders time watch? And not only that, but Mel can go back in time. Why not to go back in that moment and hit “whisperer” with toxine before it enters Macy, to change the future? As the “future” Mel came back to “present” Mel to transfer her baby 2 times! The same past changing possibility… Read more »

She was my favourite, some people think that these actresses are average but i do not pay those sort of comments any heed, as i think they all play their individual roles excellently, and Madeline played her role with finess. She was the heart of these three, but then it will be interesting to see who the new one is in this three, it happened in the original series of Charmed where one left the series and a long lost sister was discovered, so that cld happen this time as well.

I do not understand why everyone is so distraught over Madeleine Mantock leaving the show. She was an average actress (just like the other two). I think the coolest and strongest character on the show is Abigael (who is not really an evil demon but a good character deep inside, who has helped the Charmed Ones many times) and I’d like to see her replace Macy on season 4. That would be quite a twist, and the writers can make it happen. I also think we need to see more of the “Perfecti”. The “Perfecti”were both so cool! The “Doom… Read more »

I do think Abigael cld be a gd choice to replace Macy, even though i am srry to hear that she is leaving the series.

I agree about Abigail! I really like her and it was my first thought that there will be something that “her mother Francesca is actually not her real mother and that would explain very much why she had such a different attitude against Abby”. It would be great to see her as one of “the sisters” than some new character.

She will be missed. But what a great tribute to her as the one to save the world from the Whispering Evil. It seems that no one has mentioned that Jordan may have healing powers like a Whitelighter. Anyway, good luck to Madeleine for the amazing job she has done on Charmed.

I’ll miss her character but I understand everyone has there careers to think abt. She was terrific. Oh my God, where are we gonna find another witch? Is there another sister anywhere

I am crushed!!!!! I loved her character! I wanted to see more of her, her romances, her undisivieness, her boldness etc. Story lines could be better or not as predictive. I really love this Charmed series. I hope she will reconsider. I can’t wait for the new season to start! I also binge watch the past episodes! LOL!

I was wonder that Charmed first version had Prue Halliwell leaving work
if will happens same Charmed reboot? And is there, I was right, always someone
leaving 😡 isn’t easy to work during pandemia.. people give up everything for
better life, i don’t know

Fun Fact: Shannen Doherty only lasted 3 seasons on the 1998 version. Will they find another lost sister???

The problem there is, they used that storyline to bring Macy in to start with. One thing I could see with all the time jumping would be for a future Macy to comeback with a new actress.

I think the coolest character on the show to be the 3rd Charmed, would be Abigael (who is not really an evil demon but a good character deep inside, besides she has helped the Charmed Ones many times) and I’d like to see her replace Macy on season 4. That would be quite a twist, and the writers can make it happen. Plus she maintains the same figure, unlike the other two who gain a few pounds then lose weight then gain it back again …

I agree with yr, except the weight comment, that seemed a little left of feild to me.

She was both good and annoying on Into the Badlands. Was it her choice to leave that show? I don’t know.

It must have been her choice. If it wasn’t then the showrunners would not issue this very kind and sweet statement about her making future cameo appearances. They’d keep quiet and say nothing, if she had left on bad terms.