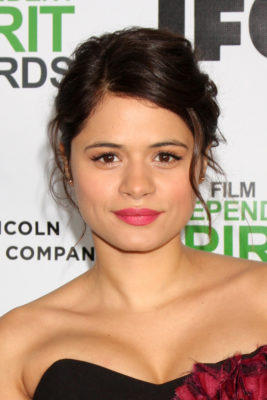 Charmed has a new star. TVLine reports Melonie Diaz has been cast in The CW’s reboot pilot.

The CW‘s Charmed reboot comes from Jane the Virgin creator Jennie Urman and “centers on three sisters in a college town who discover they are witches. Between vanquishing supernatural demons, tearing down the patriarchy, and maintaining familial bonds, a witch’s work is never done.”

On Charmed, Diaz will play Mel, one of the three witch sisters who is described as “a passionate, outspoken activist who loses her way in the wake of family tragedy.” According to TVLine, Mel is also a lesbian.

What do you think? Are you a fan of the original Charmed? Would you watch the CW reboot?

I was a big fan of charmed the actresses all four were awesomeb at it, they were so good they pulled you in and made it seem so really that is how good the four women were.. i was so happy when i heared the cw was bring it back thinking it would be a pick up of the old.. and have the same cast but there kids where the charmed ones this time and kicking butt like there moms.. but no sadly it was not.. and no i wont watch it.. i seen the privew of the new one..… Read more »

They need to cancel this SJW garbage reboot immediately.

Yes I would watch. I loved the show.