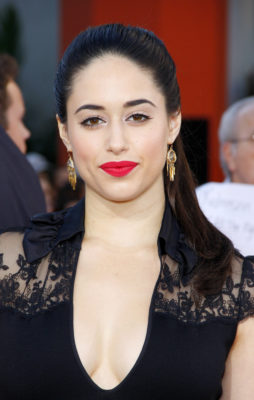 The original series followed a group of teens who live in the small town of Roswell, New Mexico—the site of the famous UFO incident. The cast included Shiri Appleby, Jason Behr, Katherine Heigl, Brendan Fehr, Majandra Delfino, Nick Wechsler, William Sadler, Colin Hanks, and Emilie de Ravin. The show ran on The WB from 1999-2001 and then switched to UPN for the 2001-2002 season.

On Roswell, Mason will play the lead role of Liz Ortecho, “a jaded biomedical researcher and the daughter of undocumented immigrants, is haunted by a tragic incident. She discovers a shocking truth about her teenage crush who is now a police officer: He’s an alien who has kept his unearthly abilities hidden his entire life.”

The CW‘s Roswell reboot comes from writer Carina Adly MacKenzie and The Originals‘ creator Julie Plec is set to direct.

What do you think? Are you a fan of the original Roswell? Would you watch the reboot?

Um no. Just no. Ok they whitewashed the original Roswell with Liz Parker white girl instead of Mexican Liz Ortiz and the network wrecked it a couple seasons in by switching gears and focusing on action not teen angst in an attmept to get more viewers with a weird Supermanesque plot about Max being some leader reborn in human form that pretty much turned everyone off. They tried to save it in the final season but it was just an uneven mess. It does not need to return with the right race for Liz and everything else wrong. Moving too… Read more »

Nice to see someone else call out Plec. She makes me sick with the plot of TVD fanfiction writers wrote it better than she ever could.

Jeanine Mason is Cuban American. While still not Mexican, at least she’s Hispanic.